The first return is quite appropriate I think. Adam Kennedy, an alumni of my high school and former Angel is the first person to be a success for the 365 Letter challenge, and I'm pretty happy to score the card. I've actually had a good amount of difficulty getting his autograph in person since he's from Southern California and is normally chatting with his family or friends before games. I don't really like to interrupt that (even though I know his dad and haven't even considered asking him to get it for me) and with him being on an out of state team consider that family time not to be disturbed.

Kennedy is a native of Riverside, California and was taken in the 1st round of the 1997 draft by the St. Louis Cardinals. He would make his debut with St. Louis in 1999 but would be traded to the Angels as part of the package for Jim Edmonds. From 2000 to 2006 he would be a fixture in the Angel lineup and helped to power them to the franchise's first World Series Championship by slugging the Angels through the ALCS earning the 2002 ALCS MVP.

He would leave the Angels to go back to St. Louis, on to Oakland, Washington, Seattle, and now currently back to Southern California with the Dodgers. Since moving on from the Angels teams have asked him to play every infield position but catcher, and shortstop allowing him to be highly versatile and successful defensively in each position.

So far in his 13 season career he has been a reliable infielder with some pop batting .276 with a solid .326 OBP and 78 Home Runs. Only once in his career since his debut in 1999 has Kennedy appeared in less than 100 games for a club, so I'm sure so long as his glove stays steady and bat reasonable he'll be able to eventually decide when to hang up his cleats himself as opposed to teams not being interested in his services. 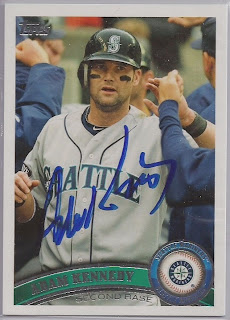 Kennedy responded to my request sent to his home address after only 7 days and autographed this 2011 Topps card for me. I think it's not a bad signature considering he was nice enough to sign in blue sharpie and tried to fit the signature across the Mariners gray instead of the blue arms in the picture. I'm always glad to put a local guy in my collection so an Adam Kennedy autographed card is a nice pick up for me.

I debated sending out an Angels card, but actually am making a mini task of seeing how many cards of the 600 card set I can get signed myself. It's not a goal so much as just an interesting part of the hobby seeing as I doubt I'd be able to get all of the superstars to sign for me, let alone me wanting to use such an opportunity on not a rookie card or baseball.
Posted by RJ at 12:29 PM