A few years ago I had the opportunity to see distinguished author Ray Bradbury speak about his career.  Bradbury is best known for his works Fahrenheit 451 and the Martian Chronicles, but he was a prolific short story writer and produced many great works and collections beyond those two novels. It was an enlightening experience to hear him talk and I walked away with the idea that literature needed to be protected and helped to grow by people not afraid to write what they believed in.

Interestingly not many people know that Fahrenheit 451 was written on a rental typewriter in the basement of UCLA's Powell library. Not only is it's birth place a little known fact, but it's also not well known that the book was serialized and published in the March, April and May issues of Playboy in 1954 after the magazine was launched in December 1953.

Unfortunately Bradbury has since passed away and one of America's most celebrated authors is no longer with us. I was able however to have the pleasure to meet Mr. Bradbury after his talk and have him sign a pair of his books for me that I will always treasure.

One of my favorite pieces is this Ray Bradbury autographed Martian Chronicles copy. 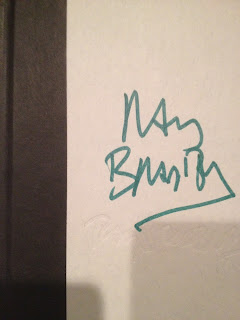 Also Ray Bradbury autographed "One More For the Road" for me. 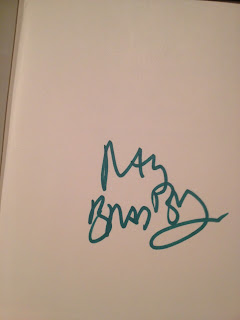 Though lately its been difficult to find the time, throughout my life I've always been a reader with a book around for me to work through when I have a few minutes so I've privately enjoyed slowly building an private library of autographed books on my shelf. I know these Ray Bradbury autographed books will forever be a strong cornerstone to continue to build my collection around as not just works of literature but also to me as pieces of Americana.
Posted by RJ at 10:03 AM