Well readers, sometimes the internet is a wonderful tool that teaches you lots of new things. Other times it leaves you hanging high and dry with incomplete information. Hopefully this blog is more of a complete source with interesting baseball tidbits, autographs, TTM information, in-person tips and stories. A few websites however led me down the wrong path with former pitcher Bud Daley.

Daley played for the Cleveland Indians from 1955-1957 and put up okay numbers while with them, but wasn't having too much success. In 50 games, including 11 starts, Daley only managed a 4.87 ERA with a 3-9 record. The Indians traded him to the Kansas City Athletics in 1958 and his career had a revival as a Kansas City starter.

Moving to the rotation allowed Daley to find a groove and he dropped his ERA a full point, putting up All-Star caliber numbers being selected to the 1959 and 1960 All-Star games. This was interestingly during the time period when there were actually 2 All Star games played in an effort to boost the player pension fund, with one game played in an NL park and the other in the AL. Daley may have been a two time All Star but attended 4 All Star games.

Having been moved to the bullpen in Kansas Daley was moved to the New York Yankees during the 1961 season. He finished 1961 as a Yankee starter and made two postseason appearances as a reliever and a starter during the World Series. He went on to be a member of the 1962 championship Yankees but as a reliever having been relegated to the bullpen besides a few spot starts for the rest of his career.

Daley's career after 10 seasons in the big leagues would leave be fairly accomplished as he'd hang up his hat a 2 time All-Star and 2 time World Series Champion. He had a 60-64 record and a 4.03 ERA with 549 Strikeouts. Of 248 games played, Daley started 116 going the distance for 36 Complete Games. Surprisingly despite his ratio of Complete Games in his starts only 3 of his Complete Games would be Shutouts. 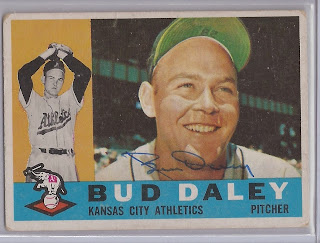 Mr. Daley not only penned a nice signature on a1960 Topps Card I got through the Diamond Giveaway but he also took the time to answer a few questions. This is where my online research failed me and I got to a bit of a rocky start.

Were there any challenges to being a lefty kunckleballer?
Much to my chagrin Bud's response is short and to the point. There's not much else I can add or say about this besides the fact that I'm highly embarrassed and wanted to omit the response were it not for my journalistic integrity. Bud pointed out, "I was not a knuckleball pitcher"

How did it feel to have Berra, Mantle, and Maris behind you when you took the mound?
I'm going to guess my first question rubbed Bud the wrong way because his response wasn't a peak into hallowed memories of three Yankee legends. Instead Mr. Daley decided it was "Great"

What was your favorite part of being an All Star?
Seeing as this year we had 80 something All Stars, being named an All Star has lost a bit of it's allure. Considering the rosters weren't as enormous in '59 and '60 Bud seemed to appreciate being selected "Being from KC on a last place team"

Was either of your World Series Championships more meaningful?
Bud selected something that most people can agree is a great accomplishment and honor. Despite having started with the Kansas City Athletics he went to the New York Yankees and in "1961 being the winning pitcher in last game"

Of all your years in the Majors, was there ever one moment or memory that stuck with you throughout and after your career?
Recognizing the roots of his success and career revival I think Daley picked something pretty personal when he shared "KC All Star game" as his career's highlight memory forgoing the two Yankee rings.

After reading his responses I'm very glad I was able to get a Kansas City Athletics card since he seemed to cherish that time even more than his championships in New York. The signature is clean, tight, and in a great location for one of my favorite autographs.

Mr. Daley was kind enough sign the card and respond to my letter sent to his home address in 8 days.
Posted by RJ at 6:25 PM