While at Angel Stadium I was hanging out during the Oakland A's batting practice and noticed a few people with some noticeable accents. By noticeable I mean awesome as there were a few Australians in the stands. It turns out that these were ball players from Australia who knew aussie Grant Balfour.

We had a pretty brief encounter as I hung out listening to their conversation (obviously listening not eavesdropping but they didn't seem to mind) about other Australians in the league and a few minor leaguers. It's a pretty small community and nice to know that they had a pretty good handle on all their countrymen in the US trying to make it in the bigs. It was also cool as he leaned in and shared some insider knowledge that hadn't been announced to yet, that he was told earlier in the day that he was going to get the shot as closer after Brian Fuentes' woes on the diamond.

After the guys left Balfour's family was actually there and he chatted with them for a while (I took a few steps away down the wall so they could have family time and didn't listen in). When his parents started to leave I reclaimed my spot on the wall and talked to Balfour myself for a minute. 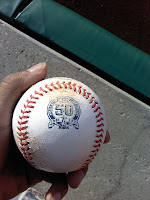 His family was on the way back so I had Grant autograph a ball for me then asked him the one question I had been dying to know about the former Tampa Bay Ray.

Did you like playing as a visitor in Boston or New York more?
(Insert Australian accent) "Oh New York mate." I probably should have asked him which stadium in general he liked to pitch at because Balfour's stats against the Sox and Yankees especially away aren't anything he'd be overly fond of. At Old Yankee Stadium he posted a 3.00 ERA and had batters hitting .393 against him. At Fenway a 6.75 ERA and .295 average awaited him.

I didn't have a chance to catch up to Grant the second time the A's came to town, but it was nice to share that little moment at the start of the season.
Posted by RJ at 12:53 PM