One thing I definitely enjoy getting signed would be the prospect, rookie, or 1st cards of players. It's nice to note the beginning of a players career with their first card of note. This is especially fun for me to do for players whose cards are vintage at this point since it's more difficult to track them down than current rookies.

Jim Anderson was drafted by the California Angels in the 2nd round of the 1975 MLB Draft. He cruised through the minors to debut with the Angels in 1978. He was able to play almost every position which helped the .218 hitter play 419 MLB games from '79-81 and '83-'84. He would debut for the Angels as shortstop but appear at 3rd base, second base, catcher, and an outfielder by the end of his career. 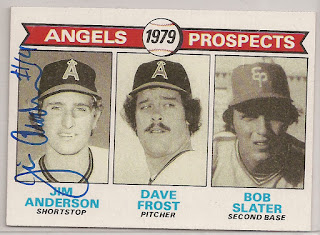 Mr. Anderson was kind enough to sign his 1979 Topps prospect card for me as part of the Angels 50th Anniversary celebration. He had his family with him and mentioned to what I believe was his daughter that this is the card he had mentioned earlier. I'm assuming he was explaining to her which card was his rookie card. Dave Frost also appeared as part of the alumni appearances but since I didn't have any idea of how to get Bob Slater I opted to not have Frost sign the prospect card as it'd be a project I started that never finished.
Posted by RJ at 11:12 AM