Well folks as the holidays begin to roll around I decided to appreciate one of the best TTM gifts our community has available to itself, another interesting conversation with Mr. Virgil Trucks. The previous post including a pair of autographs and further interview questions can be seen here.

Without further ado here is my next set of questions with Mr. Trucks, at the bottom are now copies of the original letters:

Was there a time during your no-hitters you realized you had no-no's going?
While most pitchers in their post-game interview tend to deny the thought crossed through their mind, Mr. Trucks admitted what I've always suspected, "Yes. Only the 8th or 9th inning."

How did you celebrate each no hitter?
I've always been curious about the post-game celebration for such a milestone. When Galarraga had his perfect game blown on the last out, he was given a car. Other guys buy their defense watches, in the previous era of baseball it was a little different, "I just sit around with the guy then going out to dinner. Nothing different. As for the Yankee game. We left after the game for Boston. So again nothing unusual."

Who do you consider the greatest players you played with? Why?
This is a veritable who's who of the Hall of Fame, "With-Hank Greenberg. Charlie Geheringer. Al Kaline. Rudy York. George Kell. Mickey Mantle. Yogi Berra. Sherm Lollar. More than I can mention. Against (Gac) Cronin. Ted Williams. Jimmy Fox. Bill Dickey, Ted Lyons. Joe DiMaggio and many more."

What did you think of your time in Kansas City?
"Kansas City. I Loved."

What did you think of Bud Daley? What sort of teammate was he?
Having heard earlier from Mr. Daley earlier, I was curious to write Mr. Trucks about his accomplished former teammate, "He really wasnt with the club that much. I really didn't know him very well. Nice person."

What is your favorite memory from being in and winning the World Series?
It's special that Mr. Trucks was able to serve his country and then still be able to get one of the highlights of his career, "It was my first W.S. in 1945 and just getting out of the Navy in time to play in the series and winning a game will always be one of my favorite memories."

Do you think the World Series is the same now? Is it as meaningful today as it was when you played?
Baseball definitely doesn't resemble how it was when Mr. Trucks played. Expansion, instant replay, playoff format, it's all different and even the Championship itself has gotten a facelift, "The W.S. is a different type than when I played. You won the pennant you played the one that won the National League pennant."

Is there anything you wished you accomplished before you retired from baseball?
"Not really. I won a WS game and Allstar game. Pitched 2 no hitters in one year. Won 20 game in a season. I'm very happy with what I accomplished." 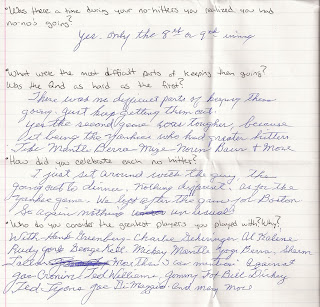 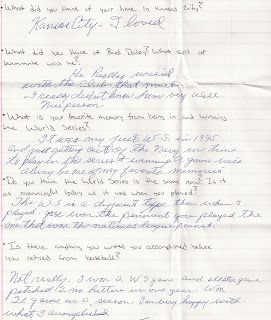 Mr. Trucks was kind enough to write back to my letter sent to his home address after 14 days. It's always nice to hear from such a great player and I hope everyone continues to appreciate his signing especially here in the holidays.
Posted by RJ at 12:40 AM