No other introduction is really necessary after I say those two words to bring up the Seattle Mariners ace pitcher Felix Hernandez. The 26 year old ace is the king of the Mariners rotation and literally holds court in Seattle during his starts with a special seating section in Safeco.

Felix was signed by the Mariners at age 16 in Venezuela during the summer of 2002 and started his career with Inland Empire. By 2005 Hernandez had blown through the minors and was ready to get a taste of the show barely at age 19. 8 years later Felix stands amongst the elite of the MLB. He is a 3-time All-Star, led the AL in Wins in 2009, and won the 2010 AL Cy Young Award the same year he won the ERA Title. To tidy things up and cement his dominance in Mariners history he pitched the Mariners 1st Perfect Game in team history.

In his 9th season in the MLB and still only approaching his peak years Hernandez has dominant statistics. He is a 96-72 despite pitching for a club historically short on the offensive end. He maintains that record by having a 3.17 ERA and 1438 Strikeouts. With his best years possibly still ahead of him and multiple public statements about his comfortability in Seattle and no desire to leave Felix has the chance to be a pitcher for the ages. 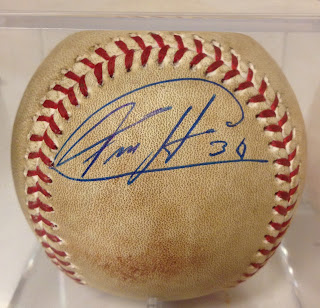 During the 2012 season Felix was slated to kick off a series against the Angels in Anaheim. I was able to get Felix's warm up ball tossed to me from the bullpen after he finished warming up. The following day I was able to get Felix to sign the ball for me before the next game. I told him it was his warm up ball from the previous day, but he didn't sweetspot it. I'm not sure if it's because I wasn't a little kid or because in the game itself he gave up 5 runs but either way it's a Felix Hernandez autographed baseball on a ball he threw and it'll look great forever in my collection.
Posted by RJ at 8:15 PM