During the 2012 season, the best Big League Moment that could possibly happen occurred at Angel Stadium when the Cleveland Indians were in town to play the Angels. The Indians acquired pitcher Justin Masterson from the Boston Red Sox in the middle of the 2009 season for catcher Victor Martinez. As many of you know I'm a big Red Sox fan and Masterson was one of my favorite players on the team after he debuted on the team and went the longest debut without taking a loss at home in the franchises' history.

I went to Fenway repeatedly after he debuted to buy a player t-shirt with his name on it, and finally got one the first day they were available. I was there for his start in 2009 when Jacoby Ellsbury stole home off Andy Petitte to get the go ahead run to give Masterson the win. When he was traded to the Indians I was always sure to try to get tickets to see his starts and would wear his Red Sox shirt to show support. Even though this normally gets me plenty of pretty rude comments from Angels fans, Justin's a favorite player so I always take it.

I wore my Masterson shirt to the game and when I was getting to my seat a guy came up to me and asked if he could take a photo of my shirt. I said sure and let him take a photo of the "Masterson 63" on the back. I asked if he knew him, and he responded yes. He was his agent and he was sending the photo to Justin's wife. I couldn't resist so I asked if he could help me get Justin's autograph. At the end of the game he let me come along to wait with him since he was picking up Justin.

It was crazy to see players walking out smiling and not be shooed away or ignored when I stood there. I said goodnight to Ubaldo Jimenez, Chris Perez, and Sandy Alomar Jr. as they left. The inner grapher in me was tempted to try racking up on the players as they left, but I knew the experience was a very special one so I just nodded and said goodbye to them as they walked away. Justin ended up walking out to say hi to some friends who waited after the game and signed for all the regular graphers who were waiting to get signatures. He signed multiples, was very personable sharing stories and answering questions while he signed for everyone who asked.

When he was done talking and signing for everyone Justin's agent introduced us and I got to talk to one of my favorite players uninterrupted. I shared the story of me getting his shirt in Boston and freaking out when I saw Jacoby break for home against Petitte and he laughed saying "he stumbled home." While I was talking to him I told him how I made sure to wear the shirt even though it's unpopular and right on queue an Angels fan walked out and lightly slapped me on the chest saying "Red Sox! No wonder the Angels F***ing lost" Justin looked very shocked and responded "Well goodnight to you too lady!" and I told him it was no big deal since supporting him was worth the abuse.

He said thank you for the support, autographed a ball I got from Chris Perez during BP, and took a photo with me saying photos were better than autographs anyways. Seeing as he's 6'6 and I'm 5'10 on a good day it's a pretty funny photo. It was definitely one of the best memories I've ever had and very appreciative that he and his agent made time for me so I could meet one of my favorite players. 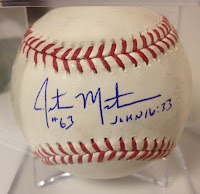 Nowadays fans stop caring or even being polite when a player goes to another team, and sometimes I understand (Johnny Damon to the Yankees) but if the player has no choice and is traded why stop supporting them? I'll always support Masterson's career and hope he continues to have a bright one.