One more benefit to living in Southern California is the local entertainment and music industry. As I posted before I had the opportunity to see rock band Alien Ant Farm perform locally and got their autograph, and I was also able to meet the band Sugarcult.

Sugarcult is best known for the songs "She's the Blade""Pretty Girl" and most notably "Bouncing Off the Walls" and they have a pretty high energy set as a result of their hits. I got to the front of the performance which was fun and then after the set their bass guitarist threw a pick into the crowd. I was lucky enough to catch the custom pick he had just played with. 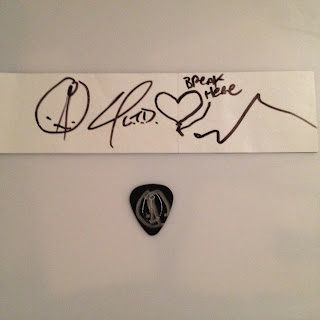 After their set part of the band hung out with the crowd and signed autographs. I was able to get bassist Airin Older and guitarist Marko Desantis to sign a sticker and Airin Older autographed the pick he through into the crowd. Marko obviously had a little bit of fun with it since he doodled a heart and the break here inscription on the seem of the sticker backing.
Posted by RJ at 4:27 PM