As you've seen from a few previous posts I went to fight week for UFC 157 in Anaheim. I went to the UFC's fanfest the day of the fight at the Honda Center. It was interesting to me as everyone in line with me was a UFC fan or collector. Obviously I'm a big baseball fan and collect baseball autograph's so it was interesting meeting people who primarily collect fighters.

The first autograph of the day that I was able to get is definitely one of the best and one of my favorites. I got a photo signed by UFC legend Matt Hughes. Matt was really nice and signed with my Gold Sharpie, and when I said "Mr. Hughes would you sign UFC Hall of Famer" he smiled and said, "Call me Matt, no problem" then he inscribed "9x Champ & HOF" when I got this Matt Hughes autographed 8x10 photograph. 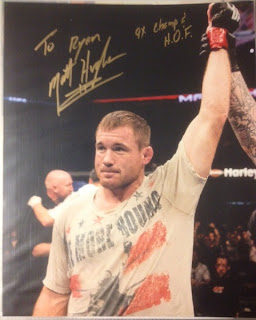 After getting Hughes I went to the closest line a few feet away that was of about 6 people while everyone was waiting for Hughes and got a signed stock photo of Sara McMann given out by UFC. Sara was really nice and pleasant so I'm glad I added the photo to my collection instead of skipping it like a lot of people. 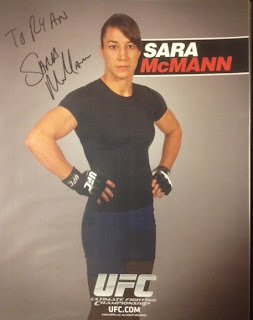 Signing with Sara was Travis Browne who also autographed this photograph. 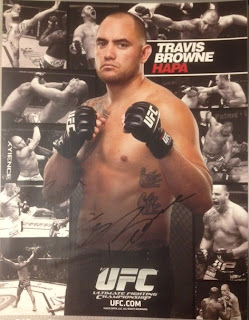 The next autograph I got was one of a fighter I was really excited to meet. Fighter Erik Perez came out to his fight at UFC 155 wearing a luchador mask to celebrate his heritage and being the first 100% Mexican fighter in the UFC. He won a decisive victory in his fight and you can see him celebrating after the win. He also signed a poster for my mom who became a fan after watching his fight. I'm glad to have this Erik Perez autographed photograph and he offered to sign another poster for me too but I declined because the photo was more than enough. 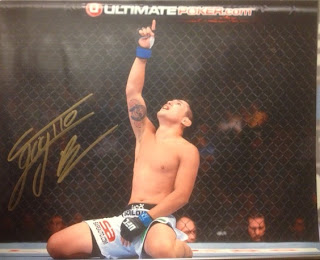 Signing with Erik Perez was fighter Alexis Davis who recently joined the UFC promotion as part of the growing women's division. Alexis Davis was happy to autograph this photograph for me and it turned out nicely. 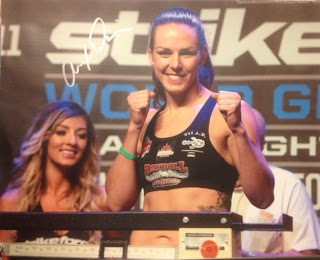 After getting Perez and Davis I got in line to score one of my favorite fighters and one of the most exciting to watch Anthony "Showtime" Pettis who was really nice and inscribed "Showtime" under his name. I've already got this Anthony Pettis autographed photo in the rotation of photo's I frame in my room. 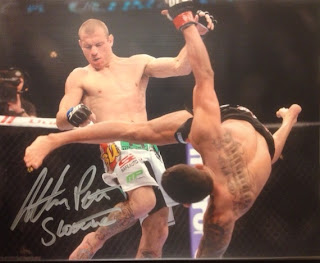 With Showtime was fighter Mark Munoz who I didn't have anything for, so Mark Munoz autographed the stock photo UFC provided. 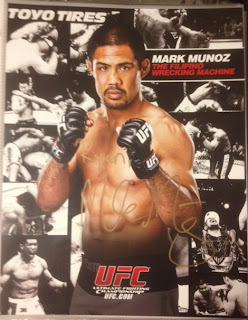 After getting Showtime and Munoz I got in a very long line and waited a few hours to score one of the most recognizable names beyond fight fans, Chuck "Iceman" Liddell. Liddell was nice and quickly signed my photo for me as well as inscribing "Iceman" I was happy to get this Chuck Liddell autographed photo since he's much more than just a fighter. 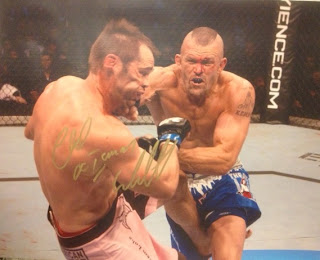 Alongside Liddell was recent UFC signee and The Ultimate Fighter Season 18 coach Cat Zingano. There was a really long line for Liddell who had more than 200 people in line with most of them asking him to sign multiples for them which he did for most people that asked. Not too many of them looked interested in getting Zingano's autograph even though there were the stock photos provided and many declined. I was actually looking forward to it and when she asked if I wanted an autograph said yes. She reached for a stock photo I told her I actually had something for her and she was shocked. When I pulled out my photo she was pretty excited about the shot I printed out and smiled asking my name signing it to me "<3 Cat The Alpha Zingano" 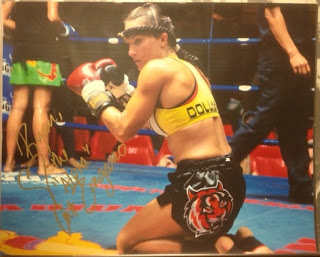 That wrapped up my graphing seeing as I got shot down by Miesha Tate as she walked into the event saying she would sign at a table, but I wanted to get inside and watch all of the fights on the undercard so I passed on getting in her line.

The fight itself was awesome and I'm really happy to have gone in person to watch.

After the fight let out I decided to try my luck graphing any fighters that would come out. I went to my car and on my way back to the most likely exit ran into fighter Lavar Johnson who was making his way to car after his loss that night. He quickly signed this mini fight card handout of Ronda Rousey, Liz Carmouche, Dan Henderson, and Lyoto Machida for me and left.

I had 1st UFC Head Referee Big John McCarthy autograph it also, Big John was the ref who brought the bantam weight title fight of Rousey putting Carmouche in armbar to a stop.

Referee legend Herb Dean also came out so I quickly was happy to add him to the mini poster. 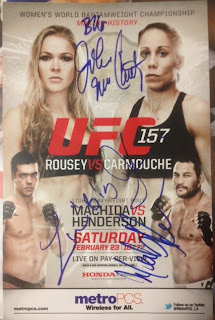 That wrapped up my experience of going to UFC 157 and it really was a great one. I had an awesome time during fight week, graphing, and at the fight itself seeing Ronda Rousey do work.
Posted by RJ at 5:05 PM