Well I woke up on the holiday morning a little bit latter than normal and logged onto my computer to see a wonderful surprise. Author, blogger, and ballhawk extraordinaire Zack Hample had altered his West Coast road trip to include the September 5th game at Angel stadium. To say I was excited is to an understatement. I immediately went into action with the necessary preparations for a surprise visit by his ballhawk-ness.

Less you readers forget, or don't know, Zack is the ballhawk/author who has written the books How to Snag Major League Baseballs, Watching Baseball Smarter, and The Baseball while updating readers with his blog The Baseball Collector in his ball collecting supremacy. I've only read the latter two books and follow the blog, and can firmly recommend all three as entertaining and necessary reads.

But, back to the preparations. I snag baseballs as needed typically with a specific use of the ball in mind when I start. Shockingly I will admit I've always barehanded balls or gotten them handed to me by a player or coach. I've actually only had one drop this season and that was when I was knocked on the arm by someone next to me. Anyways, in honor of Zack I decided the time was right to finally get a glove. I also decided it was necessary to get a hardcopy of his book The Baseball, because my copy was a digital one on my Nook. Thus off I went in the rain to buy both book and glove.

While waiting for the stadium to open it happened, my friend spotted Zack and we went over to introduce ourselves. I'll say it once and I'll repeat it as often as needed, Zack's a nice guy. He not only signed his book but wrote a nice inscription and personalized it to me. I really did appreciate him sitting down to get a better position to sign. We discussed the layout of the stadium a bit and I let him do his thing with a local reporter who was following up on the hero of the first Mike Trout homer. Here's a quick photo outside of them talking. 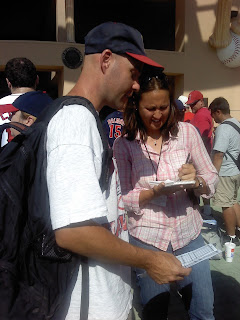 If you're interested in reading the article about Zack in the OC register you can find it here.

I was able to catch up to Zack inside after he had gone on a bit of a snagging spree after I caught my glove's first ball, a nice toss up by Trayvon Robinson in Center Field. It's a pretty high throw but Trayvon put it right on the money and the fresh glove caught it perfectly though stiffly.

I went down to the seats behind the visiting Mariners dugout where Zack was and he let me tag along with him for a bit to answer a few questions and watch him work trying to get a ball for the warming up Mariners.

It was a bit loud so I couldn't record the interview, but I did take notes. The answers if they seem short and sharp are only because I couldn't write full response in my notes while at the game, but I will say he gave great answers to everything while I interviewed Zack Hample.

You've talked about a few helpful players in your blog and books, who are the players that really help you out with balls?

"Brian Stokes, D.J. Carrasco, Livian Hernandez even though he always asks me how many he's given me this season."

Are there any players who go out of their way to not give you a ball or help?

"It's been a while since a player did that. Probably a few years."

Citing my own failure to reel in a ball by Felix Hernandez, he threw it in the sun and I was completely blinded, are there any big players you'd like to get a ball from?

"Texiera, Matt Kemp even though he's hard to get a ball from, Robinson Cano, plenty of good players it'd be nice to get one from."

Do you have any balls you'd like to get still?

I was wondering if you thought about trying to get in on Thome's 600th.

"I thought about Thome, but when he was at 598 he was in Detroit. He homered twice in that game, and it's really tough to get balls from there."

Referring back to my earlier drop I had to ask how often Zack dropped a ball. He was pretty candid and put my drop into perspective.

"Even the pros have an error or two and misplay a ball. I probably don't really drop a toss up but can miss a homer on the fly. If it hits the edge of my glove it's probably because I wasn't focusing enough. Earlier I misplayed BP and started to leave when I didn't realize there was another BP group."

I know when certain teams come to town there's a drop off in homers. When the Nationals came there was a bit of a drop. Do you notice if it's harder to get a BP ball in an National League stadium than an American League since there's no designated hitter?

"Really? The Nationals have some power guys. Michael Moorse? I don't really notice a difference."

What type of glove do you use?

"Mizuno and the one before this was Mizuno."

How old is that glove?

"This one I've had for about 15 years" Zack then showed that despite the pretty well used and worn exterior, he had redone the interior of the glove and "hope the glove survives this trip."

Zack was traveling around the stadium with his friends and had been shadowed by a representative of the media due to him catching Mike Trout's first career home run. I had to ask how many times he's been at a game with the media and if it affected him.

"I don't have an actual statistic or tally on that. Probably about a half dozen or so times this year. I may miss a ball or two while we're doing something and be a few seconds too late, but it doesn't hurt too much."

Did you end up getting that Mike Trout jersey? (He asked Trout's mom for an autographed jersey since he was nice enough to return Trout's first career homer, but didn't force the issue and demand it from Trout as a trade for the ball)

"No. I mean I could have insisted on it at the time, but it just wasn't something I was looking to do. I didn't want to come off looking like I was taking advantage of him."

All the locals will want to know, how does Angel Stadium stack up on your West Coast road trip?

"It's medium, an okay stadium to look at with not too much going on. It's a little tough since the double bullpens take away prime power alley space. It's tough to go side to side since you have to go up and around to go from Right to Left. And they stopped me from using my glove trick, so that's a knock."

"I used it once and a Mariners player who saw it wanted me to do it again. He set up a ball and I did the glove trick. Security came down, made me show them my ID, filed an incident report, and cut the string for the trick."


Zack and I finished watching the Mariners warming up and unsuccessfully tried to get a ball from Adam Kennedy. Kennedy I know is from Riverside, CA and I've seen him give away balls before but I think they were to his own kids or family friends so that didn't really surprise me and is pretty fair I think. I thanked Zack for the chance to watch him work and told him I'd try to get back down to behind the dugout after the game, but wasn't able to make it down. It really was a pleasure to meet Zack and have the chance to ask him questions as we hung out.