Especially when the "Buck" is former Major League player, manager, and coach Bob "Buck" Rodgers. A baseball lifer, it was great to have the chance to meet Buck as part of the Angels 50th Anniversary promotion.

Rodgers signed as an amateur free agent in 1956 with the Detroit Tigers, but he made his MLB debut in 1961 with the Angels. In 1961 he played in 16 games and would make the 1962 Opening Day roster for the halos in 1962 as the starting catcher at the tender age of 23.  Despite his young age he dazzled on both sides of the plate throughout the season. Amazingly the rookie not only played in 155 games, but also caught Bo Belinsky's no-hitter, the first no-hitter thrown in Angel franchise history. The rookie workhorse batted .258 and notched 61 RBIs, eventually when the season came to a close he came in second for the AL Rookie of the Year.

He'd play top level defense behind the plate for the Angels for 9 seasons before eventually hanging up his hat in 1969. The switch hitting catcher would retire with 31 Home Runs, 288 RBI, and a .232 average. Despite only playing for 9 seasons, Buck appeared in 932 games, an astounding average of 103 games a season.

The ironman didn't take any time off in his retirement and begin serving as a coach or farm manager throughout the 70's. He was finally made a Major League manager in 1980 taking over the Milwaukee Brewers. He would move on to manage the Montreal Expos where he'd win the 1987 NL Manager of the Year award. Eventually Rodgers came full circle and manager the California Angels until the team bus he was traveling on crashed and gave him serious injuries. Rodgers would miss half the season recovering and when he returned the magic that made him a Manager of the Year was gone and he'd finally retire from baseball in 1994 with a 784-774 managerial record. 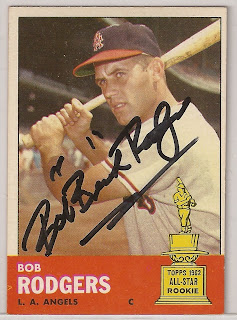 I bought this 1963 Topps card at a card show and was able to get it signed as part of the Angel's 50th anniversary celebration. I was a big fan of the card and had the option of getting Buck's rookie card, but this All-Star Rookie sophomore card was too nice to pass up. When I saw Buck signing the card, I noticed he was writing more than he had for the previous few people. Before he handed back the card, he leaned in to the Angel handler and said quietly "That was always my favorite card." When I compared my card to some of the balls that he'd signed I realized all the other autographs were just 'Buck Rodgers' and I really appreciated Buck taking the time to give me a special full name autograph because he favored the card.
Posted by RJ at 9:30 PM