It seems to be a general theme with the Angels especially that they like to acquire Southern California natives. This proved to be true with Long Beach native former catcher Mike Fitzgerald even though it was only for a lone season.

Fitzgerald was drafted by the New York Mets in the 6th round of the 1978 draft after attending Lakewood High school. It wasn't until 1983 that Fitzgerald made his debut for the Mets, appearing in only 8 games. Fitz' had the distinction of being one of the few Major Leaguers to hit a Home Run in his first Major League at-bat. Following the '83 season Fitz' became a regular player for the Mets appearing in 112 games before being traded to the Montreal Expos.

Fitzgerald played the majority of his career for the Expos and in seven seasons from 1985-1991 acted as a primary catcher for the team appearing in 633 games. He displayed solid glove work and when needed moved from behind the plate to play in every position except for pitcher and shortstop. Offensively Fitz' made modest contributions, but his defense, versatility, and ability to get on base were positive enough for the California Angels to take a stab at the Long Beach native in 1992.

After his lone year with the Angels, Fitzgerald hung up his cleats and retired from professional baseball. He ended his career with a .235 average to go with 48 Home Runs and 293 RBI. Most impressive though, was the catcher's ability to draw a walk throughout his career despite his low power numbers. Fitz retired with a .321 OBP and an astoundingly few number of double plays grounded into for his 10 years in the bigs, a mere 65. In today's metric analyzed game I'm confident in saying his talents would most definitely be appreciated by GM's. 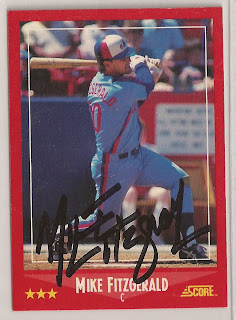 Mike was an amazingly kind veteran to have the opportunity to meet. I was able to get his autograph through the Angel's 50th Anniversary promotion, but when I first got into line I was planning on having Fitz autograph a ball since I couldn't find a card for him. When a few friends got their autograph they came back and showed Mike had actually brought his own very large stack of cards from throughout his career and was signing the item and offering an autographed card to go with it. I couldn't believe it and really do appreciate Mr. Fitzgerald being so kind to offer that. I know all the fans walked away happy and grateful that the local boy treated everyone so well.
Also I think the signature is one of the more unique and almost artsy signatures that I've seen. This 1988 Score card from Fitzgerald's Expos days is definitely a keeper.
Posted by RJ at 11:50 PM