Capps? Minnesota reliever Matt Capps that is. I've had unconfirmed reports that one of the going nicknames for Matt is the "Mad Capper" and when you take a glance at his signature you may be inclined to agree.

The native Georgian was taken by the Pittsburgh Pirates in the 7th round of the 2002 draft, and was intended to be developed into a starter. He didn't find much success as a starter, but in 2005 he was converted to relief work and made quick work of the minors eventually appearing in 4 games for the Pirates.

Since those 4 games in 2005 Capps has been fairly successful bouncing between the Pirates, rebuilding Washington Nationals, and currently Minnesota Twins as a setup man/closer. After signing with the Nationals when he wasn't tendered by the Pirates in 2010 the "Mad Capper" posted a strong first half earning himself his first All-Star selection. His first half was so impressive the Twins gave up a jewel in their farm in a top ranked catching prospect Wilson Ramos.

Capps was fairly reliable and especially necessary for the playoff hunt since the Twins lost elite closer Joe Nathan to injury in the 2010 season. When Nathan returned healthy the two went through a battle trading the closer role until Nathan regained his top form and closing role while Capps took a minor step back from his 2010 success. 2011 has seen Capps collect 15 Saves but also 8 Blown Save opportunities with an 4.11 ERA in 63 appearances.

For his career Capps has a 28-28 record and 3.48 ERA over the past 7 seasons. In 408 appearances Capps has finished 251 games, 124 of which were for a Save. His fastball and slider have netted him 297 Strikeouts which has him punching out batters at a pretty reliable rate. While the closer role may have eluded him in Minnesota Capps has the ability to continue pitching in the league with a solid amount of success and should be around for seasons to come. 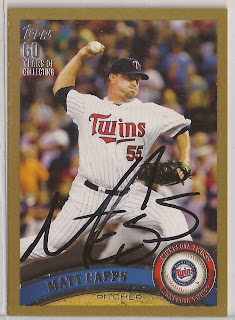 Matt Capps autographed this numbered Topps 2011 Gold parallel for me at Angel Stadium before a Twins-Angel game. I was able to get his attention after he warmed up with another reliever I couldn't identify and asked him if he could sign his gold card. He was really nice to grab a water and then walk over to sign it for me before he started doing autographs for other fans. I'm thinking that somehow when he walked over he changed from Matt Capps to the "Mad Capper" because it's a pretty crazy signature and at first thought he put an extra "S" before I realized those are 5's next to the "C". Regardless I got it signed and I was pretty happy with it.
Posted by RJ at 1:09 PM