finally! It's been a while since I was able to get anything returned to me, and I'm happy to get this one. The Arizona Diamondbacks are a franchise on the rise, and this guy is one of the key supporting cast members. Second base man Aaron Hills is one of the players who call Arizona home and is helping push the franchise back into relevance.

The 13th pick of the 2003 MLB Draft by the Toronto Blue Jays, the California native made his bones in the AL in 2005 for the Jays. He was a reliable bat that exploded for power in his 2009 All Star campaign, winning a Silver Slugger award and AL Comeback Player of the Year. Eventually his average dropped despite the pop and he was traded to the Diamondbacks. While with the DBacks, he returned to form and helped push the Diamondbacks into the playoffs.

In 8 seasons he has proved to be a productive bat that shouldn't be ignored in the line up. His average has declined to .266 but slugs a solid .416 supported by 102 Home Runs and 205 Doubles. His OBP is a impressive .321 considering his low batting average. While he may not be too impressive between the base paths with a 70% success rate his two Fielding Bible awards prove his ability playing behind them. 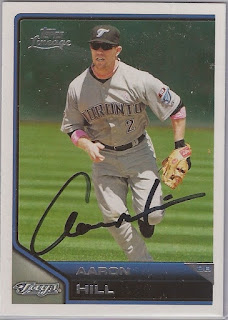 Mr. Hill was nice enough to sign this 2011 Topps Lineage for me after 30 Days, sent c/o the Arizona Diamondbacks.
Posted by RJ at 5:08 PM