One of the more cool successes I had during the 2011 season, was with the Seattle Mariners. One person who was especially nice while in Anaheim was former pitcher and current Seattle Mariners Bullpen coach Jaime Navarro.

Taken in the 3rd round by the Milwaukee Brewers in the 1987 MLB draft, Navarro quickly moved his way up through the ranks and made his MLB debut for the Brewers in 1989 as a starter. Throughout his career Navarro had various degrees of success going from reliable starter to wild. He spent 7 years in Milwaukee before leaving for the Cubs, White Sox, and Cleveland. While bouncing through his career he would post ERA's in the high 3 range then be rocked for a 5-6 ERA the following season.

When he finally retired as a player after 12 years he stood on a solid 116-126 record with a 4.72 ERA and  1113 Strike Outs. In 309 Starts he tossed 32 Complete Games and 8 of them were Shut Outs, a pretty nice ratio though the majority of the Completes were tossed in the beginning of his career with the Brewers. 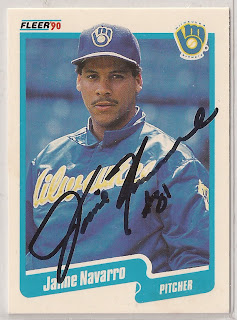 Mr. Navarro was kind enough to sign this 1990 Fleer for me in person while watching the Mariners pitchers stretch and warm up before a game in Anaheim against the Angels. He was even kind enough to get me a ball from batting practice later on that day. He signed the ball also for me, and I turned it into a Mariners team ball I'm working on.
Posted by RJ at 8:51 PM