Satriano was signed by the Angels as an undrafted free agent in the 1961 off season after the club had formed. It's always nice to get an old time player, and getting an original member of the franchise is pretty cool. Originally he was an infielder playing 3rd and other infield positions, but was converted to a catcher starting in 1963. He would play for the halos for 9 years before being eventually traded to the Boston Red Sox where he would play another year and retire. When he hung up his cleats, Satriano batted a career .225 but managed a crisp .315 OBP. He had 21 Home Runs, but his real way around the bases was through his 214 Walks against 225 Strikeouts. 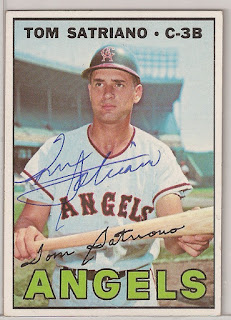 Tom Satriano was nice enough to sign this 1967 Topps card for me as part of the Angels 50th anniversary celebration at Angel Stadium. I've noticed Tom Satriano autographs this card in pen if he has a choice since I saw a few online when I looked him up, always interesting to note guys signing habits.
Posted by RJ at 9:12 PM