and he makes the catch! The Anaheim Angels are the champions of baseball! That's one of my favorite calls in franchise history, and one I get to hear in the tribute video before the start of every Angel home game. This time though I was the one who made a pair of sweet catches.

Drafted by the Angels 1st overall in the 1995 draft, Erstad came to the Angels after being a multi-sport athlete at the University of Nebraska. Through 13 seasons in the Majors, Erstad played for the Angels, White Sox, and Astros. Erstad bounced along the edge of superstardom through his first few seasons pushing for a batting title, 3 Gold Gloves, a Silver Slugger, and 2 All-Star selections, but strayed toward the average side through the last half of his career after the 2002 season. Interestingly Erstad is the only player in MLB history to win a Gold Glove as both an infielder and outfielder, and one of only two players to ever win a Gold Glove in two different positions.

Erstad took part in the Angels 50th Anniversary celebration and was obviously a fan favorite whose line filled up to capacity quickly. I wasn't able to make it in time to try to get a spot due to deciding to spend the day learning from ballhawk master Zack Hample. While separated from Hample while he was off out and about being awesome, I got my glove's first toss up from Trayvon Robinson out in right-center field. Those of you who have seen the wall out in right-center know it's a pretty long toss and Trayvon put it right on the money for a little reach over and I snagged a ball.

When I went to the line to say hi to my fellow graphers who were waiting for Erstad to start signing one of them who had secured a wristband for an autograph revealed they weren't interested in the autograph and I could have it. Not interested? Well they were, but had planned on getting Erstad on one of two 2002 World Series balls they spent years working on...but had forgotten one at home. The frustration led to them not even wanting to have him sign a blank ball and I lucked out in them offering to have Erstad sign my ball from Trayvon for me. 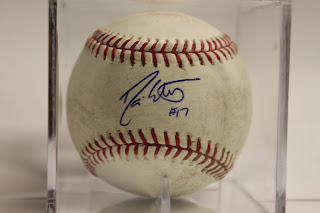 It's a great signature, and I'm really glad I was able to get Erstad's signature on the sweet spot of my ball I got from my day with Hample. Regular readers know how much I appreciate the Gold Glove award and Erstad being such a unique Gold Glover makes his autograph really special to me.
Posted by RJ at 9:51 PM