It's been a while since I received a successful 365 challenge return and I've been working on a batch right now, so I thought I'd share the success. It was a quick and very surprising return by a great signer, Arizona Diamondback's starting pitcher Daniel Hudson.

Hudson was a 5th round pick in the 2008 MLB draft, taken by the Chicago White Sox. He flew through the minors and reached the White Sox in September 2009 for a taste of the bigs. He returned to the minors but then was called up in 2010 to replace Jake Peavy following Peavy's injury. Hudson was suitably impressive in his time in the rotation that when the White Sox decided to make a playoff run and wanted veteran innings eater Edwin Jackson, the Diamondbacks took Hudson and a minor leaguer for Jackson.

Hudson was dynamic in the 2011 season, helping ace Ian Kennedy push the Diamondbacks into an unexpected divisional title. He also collected a little piece of hardware for himself in his first year in the National League, being awarded the 2011 Silver Slugger award for a pitcher. 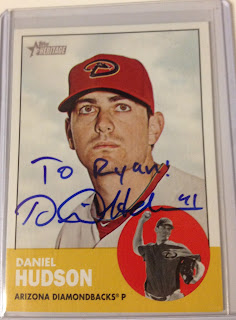 Daniel Hudson was nice enough to personalize and autograph this 2012 Topps Heritage for me c/o the Arizona Diamondbacks after only 12 Days. I'm very happy to have Hudson's reply as I think he's going to be a good solid ace potential pitcher despite his recent injury troubles that will require Tommy John surgery.

On a side note, one of the things that inspired me to write this one was a recent run in with D'backs ace Ian Kennedy. Kennedy informed me he doesn't get to this TTM during the season...but he knew one guy who does...
Posted by RJ at 7:30 PM