Another nifty 365 TTM return made it's way back to me and I was happy to see when I opened the envelope a 1987 Topps back. Who was nice enough to sign for me? I was thrilled to see Will 'the Thrill' Clark had autographed my card.

Clark was taken by the San Francisco Giants with the 2nd overall pick in the 1985 amateur draft after winning a Silver Medal in the 1984 Olympics. He flew to the Majors and made his debut in April 1986, homering in his first at bat off Nolan Ryan. He would be one of the premier 1st baseman in the National League while he played for the Giants and remains a fan favorite despite leaving for the Rangers, Orioles, and Cardinals.

He retired as a 6-time All Star, Gold Glover, and 2-time Silver Slugger. His career stats after 15 seasons in the MLB are mighty impressive with 2176 hits coming from a career .303 average and .384 OBP. He drove in 1205 RBI while smacking 284 Home Runs which supported a .497 slugging percentage. Clark was put in the College Hall of Fame, Mississippi Sports Hall of Fame, and the Bay Area Sports Hall of Fame, but Cooperstown will not call as he was dropped off the ballot after failing to receive 5% of the vote in 2006. 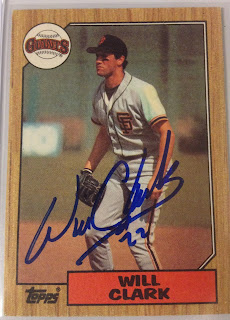 Mr. Clark signed this 1987 Topps card that I sent to his home address after only 33 days. I was really happy to add Clark to my collection and it's always nice to check another '87 Topps off the list.
Posted by RJ at 1:59 PM