Most of the time my titles are in someway related to the player, but a few have no gimmicky introduction, Nomar (kinda), Derek Jeter, and now Josh Hamilton.  Sometimes the player is all you need to say and Hamilton is the kind of player that speaks for himself.

The North Carolina native was taken 1st overall by the Tampa Bay Devil Rays in the 1999 MLB Draft. He was a surefire star in the making until his well publicized issues with drugs and alcohol derailed his fast rise through the Minors. It wouldn't be until after a rehab stint to get sober that he would eventually be taken by the Chicago Cubs in the Rule 5 draft and traded immediately to the Cincinnati Reds.

With the Reds Hamilton finally made his long awaited MLB debut in 2007. He had a solid rookie year with the Reds but would be traded to the Texas Rangers in what now looks to be a very lopsided deal, being sent for only Edison Volquez and Danny Herrera. The rest is history as Hamilton's Rangers have been one of the dominant offenses in the MLB.

His strong offensive numbers in '08 gave way to injury in '09, but then he broke through with an electric AL MVP and Batting Title 2010 season. He has been a 5-time All-Star, won 2 Silver Sluggers, and taken the Rangers to consecutive World Series appearances. Despite being taken in 1999 Hamilton only has 6 years of playing time in the MLB and those years have been plagued by injury due to the abuses in his youth. His numbers are still astounding at 146 Home Runs, 505 RBI, and a career average of .307. Despite his injury history, Hamilton has put these elite numbers while playing in the outfield, if he eventually becomes a full-time DH later in his career I have the feeling Josh will be slugging for years to come if he chooses to remain in baseball. 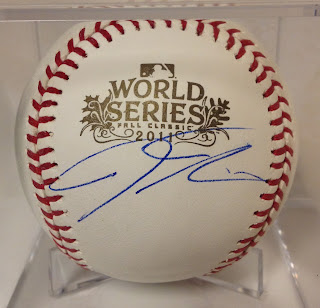 I got this Josh Hamilton autographed 2011 World Series baseball in person at Angel stadium. I know the Rangers didn't win 2011, but I really like the ball and taking the Rangers to back to back World Series' was really cool to me so I opted to go with this commemorative ball instead of a blank. Luckily though I was able to eventually get another Josh Hamilton autographed baseball.

When Josh was signing my friend asked if he had a charity to which Josh responded he had one already and was working on another. I asked what the new would be, and he laughed and said "I don't know, that's what we're working on." I'm don't doubt there are already some causes being decided between, and whatever cause Josh throws his support behind I'm sure will be much better helped because of it.
Posted by RJ at 4:49 PM