If you've never had the opportunity to interact with starting pitcher Jeremy Guthrie, you're definitely  missing out. Guthrie is without a doubt one of the funniest most interesting characters in the bigs. He's not shy from clowning around with fans even though not everyone gets his sense of humor, but he's definitely one of my favorite MLB players to see around.

Guthrie was taken in the first round of the 2002 MLB draft with the 22nd pick by the Cleveland Indians who he debuted for in 2004. He stuck around the bigs after the 2006 season and has been a reliable arm to put in a rotation. More than 700 Strikeouts support his 60+ career Wins, and he's a known innings eater to keep teams in the game with a career ERA hovering around 4.20. He's pitched for the Indians, Orioles, Rockies and Royals. He's been extremely reliable for the Royals and is part of their rebuild from irrelevance. 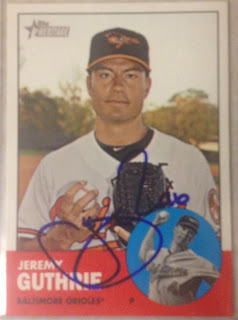 Jeremy was nice enough to autograph this 2012 Topps Heritage card for me after an Royals vs Angel game during the 2013 season. It was pretty cool because after Jeremy kindly knocked out signing for every one that asked him he hung out catching up with some of his friends a few feet away from the rest of us graphers hanging out catching up with each other. It just goes to show you that if you're polite to a player and don't mob them they probably won't mind doing a few signatures and can act like a normal person with their own friends without having to run away. Though as a side note I have seen Jeremy run away from a kid running in a little circle until he caught him and signed for him, and yes it was funny and good natured not him being a jerk.

On the walk away from the stadium I called out to Jeremy and asked him what was the absolute worst piece of trash stadium he had ever played in. Immediately he responded "This one." Sorry Arte Moreno, but seeing as Guthrie pitched in Cleveland and Tampa Bay it sounds like the Angels have some work to do off the field.