If you noticed from the posts of me graphing the UFC 157 Open Workouts, UFC 157 Fanfest/the fight and the Arianny Celeste and Brittany Palmer appearance I'm a pretty big UFC fan. So I decided to go to the UFC World Tour Los Angeles press conference/media appearance hoping to graph some of the top fighters in the UFC. I woke up, made the drive into Los Angeles and found some parking by LA Live since the event was at Club Nokia. I had never been in Club Nokia so I wasn't sure where I'd be able to catch the fighters and found what I hoped to be a solid spot to catch the fighters.

My main goal was to get the autograph of Olympic Judo medalist and UFC Women's champion Ronda Rousey. I wasn't able to get Ronda to sign for me because despite everyone there being an elite fighter she was definitely the most popular and sought after. It was really disappointing to me to miss out on Ronda again with this being the 5th attempt to get her autograph. I broke down and eventually did get a Rousey autograph.

I did have a good amount of success though because immediately the first autograph I was able to get was a UFC legend, the Rush himself. I was able to get a Georges St. Pierre autographed 8x10 photo as my first signature of the day, definitely one of the best autographs I've gotten period, and I'm glad GSP signed first so I could not worry about getting him. 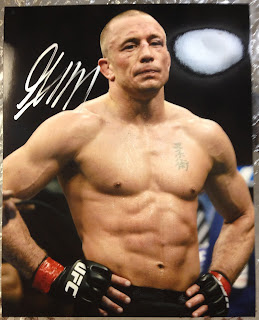 After St. Pierre signed my picture I was able to get the number contender in the light heavyweight division. Alexander Gustafsson autographed this 8x10 for me and laughed when I asked him to use some of his reach to grab my photo in the crowd, which he did and signed the photo for me. 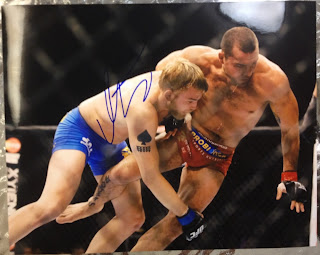 A little bit after Alexander "The Mauler" Gustafsson signed for me his opponent the current light heavy weight champion and one the UFC's greatest champions Jon "Bones" Jones autographed this 8x10 photograph for me. 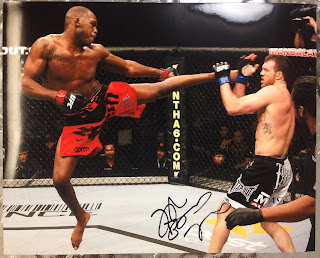 The next person to sign for me was someone I had missed out on at the UFC 157 fanfest, The Ultimate Fighter season 18 coach Miesha Tate. I ran into her while she was coming in but Miesha would only sign at the event table. Even though "Cupcake" Tate lost to Cat Zingano the right to coach the season and a title shot an injury forced Zingano out so Miesha gets another crack at Ronda and there is no love lost between the two in the bitterest rivalry in the sport. I've got autographs of most of the women now in the UFC's womens division with this Miesha Tate autographed photo but still no Rousey. 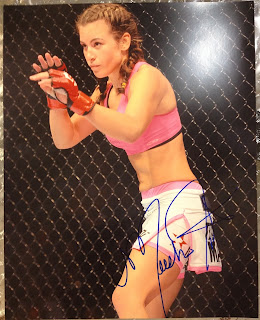 When Jon Jones finished signing UFC owner Dana White autographed this 8x10 photograph for me that I had printed out hoping to get signed when I went to UFC 157. 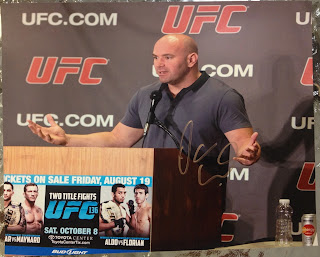 My last autograph of the day was GSP's opponent for the welterweight belt Johny Hendricks. He was the last fighter to leave the event and signed tons of autographs and took his time to pose for photographs with everyone that asked. He was nice enough to not only make it a Johny Hendricks autographed photo but to inscribe "Bigg Rigg" under his name on the 8x10. 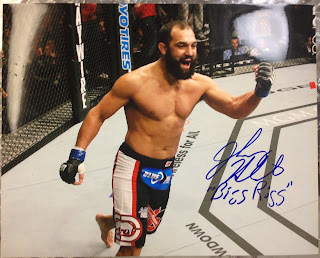 The UFC World Tour is an awesome idea and I'm glad that I was able to get quality autographs from so many of the UFC's true elite fighters. I only missed out on Ronda Rousey, Cain Velasquez and Junior Dos Santos' autographs which I think is reasonably impressive. It was a great event and I'm really happy that the tour started in Los Angeles since by the end of the tour I'm sure they're all going to be exhausted. Definitely a great way to add to my MMA/UFC autograph collection.
Posted by RJ at 10:56 PM