I was finally able to get an autograph from former Angel Catcher and first baseman Mike 'Nap' Napoli.

Nap was drafted in the 17th round of the 2000 MLB draft but didn't debut until 2006 when he stuck around immediately in the big leagues. After debuting for the Angels he switched to the divisional rival Texas Rangers which did him no favors with the fan base in Anaheim. After posting an All Star year and appearing in the World Series with the Rangers he moved to the Red Sox. While not known for a strong batting average with a career average in the .250's he maintains a reasonable OBP in the .340-.360 range by being a consistent power threat with his career .499 SLG percentage. He's been able to contribute solid production for the resurgent Red Sox who have risen from the ashes of the Bobby Valentine debacle to push again for baseball dominance. Most notably with his walk off home run against the Yankees to help finish winning over Red Sox fans. 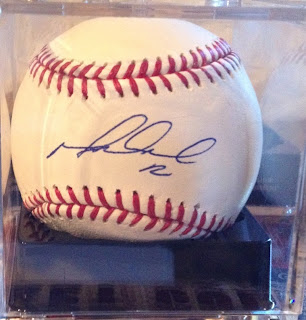 I was able to get this Mike Napoli autographed baseball during a Red Sox vs Angels series at Angel Stadium during the 2013 season. Napoli is actually a good signer when he's back in town unlike some former Angels. He doesn't seem to mind stopping for the fans that remember him or signing Angel photos which is always nice since that's what most graphers in this area have for former Halos when they come back. You do run into some players that won't sign anything of their former team.
Posted by RJ at 9:57 PM