Joey Bats aka Jose Bautista has been one of the top home run hitters in the game for the past few years. He's taken a long path to stardom but he's amongst the top of the game and would be a welcome addition to plenty of contenders if the Toronto Blue Jays weren't invested long term through the Miami Marlins fire sale in attempting to take the AL East.

Bautista was a 20th round pick in the 2000 MLB draft by the Pittsburgh Pirates but was selected in the Rule 5 Draft by the Baltimore Orioles. He was traded and played for the Orioles, Devil Rays, Royals, and Pirates before finally reaching the Toronto Blue Jays. His career reached a turning point in 2010 when he took advantage of an increased role with the Blue Jays that let him evolve into one of the more dangerous hitters in the game. He's crossed the 200 Home Run plateau, been named a 4-time All Star, is a 2-time MLB Home Run champion and won 2 Silver Sluggers in his time since becoming a face of Toronto. 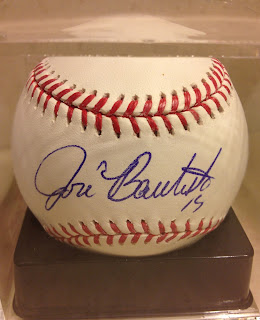 I was glad to get this Jose Bautista autographed baseball during the 2013 season when the Blue Jays played at Angel Stadium. It was awesome to get this baseball signed by Jose Bautista because he had previously eluded me the past two years. It was a great day for me because after I got RA Dickey's autograph on my Sports Illustrated Bautista came over when he finished hitting in his batting practice group he came over to the large crowd waiting and took a seat against the dugout. He told the fans he'd sign until 6:05 and for 7 minutes straight went down the line signing balls before switching to a sharpie and knocking out everything a sharpie would be appropriate for until the time he said he would go inside. Everyone was polite and got an autograph, I wish it could be like this for superstars more often.