The American League is stacked with some quality second basemen from Robinson Cano, Dustin Pedroia and now Jason Kipnis. Kipnis is a huge part of the Indians revival as a cornerstone of the franchise.

Kipnis was drafted in the 2nd round of the 2009 MLB draft and debuted in 2011 for the Indians. He's been a reliable solution for the tribe at second base with a combination of solid defense, home run power and speed on the base paths. In two full seasons he's already developed into a consistent 15/25 player. His solid numbers have resulted in an All Star nod already with more recognition likely in store for him down the road though hardware will be tough to come by considering Pedroia and Cano's residence in the AL. 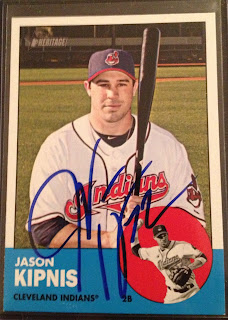 I was lucky enough to get this Jason Kipnis autographed 2012 Topps Heritage card during the Indians vs Angels series at Angel Stadium during the 2013 season. I did well getting Cleveland Indians autographs this season so I'm looking forward to them coming back around so I can work on getting a few more signatures.
Posted by RJ at 7:06 PM