Big thanks to Matt from MC's Autographs for this one. I was hanging out at the stadium waiting for the Red Sox when he gave me this Jonny Gomes 8x10 that he had an extra copy of so I could get it signed. I never had gotten Gomes before, so it was cool to drop a nicer item than just a card.

Gomes was taken in the 18th round of the 2001 MLB Draft by the Tampa Bay Devil Rays. He debuted for the Rays in September of 2003 and then finally stuck around after a big year in the minors in 2005. He's played for the Rays, Reds, Nationals, A's and currently the Red Sox. He's been a spark plug in the rebuilt Red Sox being a part of the Red Sox beard nation that has helped rebound them from the Bobby Valentine destruction into dominance of the American League. 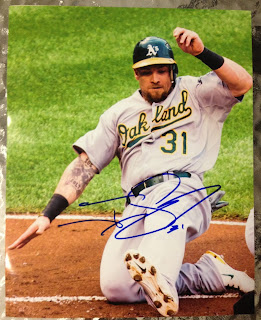 Jonny Gomes autographed this 8x10 photograph for me when the Red Sox came to play the Angels during the 2013 season. He laughed when he was signing the photo and a player in the dugout I couldn't see made a comment about the shot, responding he must have been hustling after a steak dinner.
Posted by RJ at 9:12 AM