It's been some time since that was announced but in the 90's it was a common statement every time former pitcher Pat Hentgen took the mound. Currently Hentgen is back with the Blue Jays as bullpen coach for the team and I used that as my chance to meet him to get an autograph at Angel Stadium.

Hentgen was taken in the 5th round of the 1986, signing with the Toronto Blue Jays and debuted in 1991 for Toronto. He would pitch for the Cardinals and Orioles before returning to the Jays to retire after 14 seasons. He'd have a very strong career being part of the 1993 World Series team, being named to 3 All Star teams and winning the 1996 AL Cy Young award. He'd hang his hat on 131 Wins, 1,290 Strikeouts, and a remarkable 34 Complete Games out of his 306 games started. 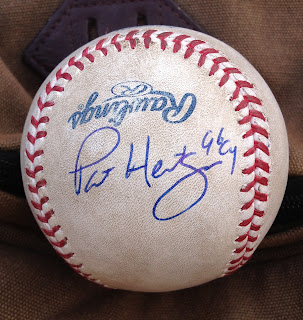 I was able to get this Pat Hentgen autographed baseball during the Blue Jays at Angels series at Angel Stadium during the 2013 season. I made a rookie mistake tossing my ball to him asking for his autograph and if he could include his Cy Young award which he inscribed "96 CY" but didn't ask him to sweetspot the ball.

I should have taken the time to ask for his autograph, if he'd please sweetspot and then tried to get the inscription but I was trying to get the ball inscribed before random fans came over to start asking for autographs. My mistake but the inscription definitely makes it one of the better side panneled baseballs I have. The ball was a toss up I got from Alex Anthopoulos the Blue Jays bullpen catcher.
Posted by RJ at 12:44 AM