I was able to continue with my project to assemble the Red Sox 2007 World Series Championship rotation through a trade with my friend Al. He's working on building the 2012 Topps Heritage set so I traded him a giant stack of short prints and a few I had gotten signed myself for this Josh Beckett autographed baseball that he got one of the days I wasn't able to graph the Dodgers. 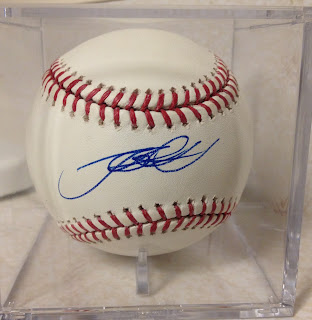 Beckett is a multi-time All Star, won 2003 and 2007 World Series Championships, crossed the 1700 Strikeout plateau, and has more than 130 Wins. He's a welcome addition to my collection and now is alongside my Jon Lester and Curt Schilling autographed baseballs so now I only need one more to finish the collection that won in 2007.
Posted by RJ at 10:00 PM