I thought about coming up with a snazzy title that would be tied into the 1-hitter Lester just tossed, but I figured it wouldn't do Boston Red Sox starting pitcher Jon Lester justice if I did that.

Lester was taken by the Red Sox in the 2nd round of the 2002 MLB draft, being given a million dollar signing bonus, the highest for any second rounder signed that year. He proved to be worth every penny, flying through the minors and debuting for the Sox in June of 2006. He is tough as nails both on and off the mound being able to mount a comeback against non-Hodgkin Lymphoma. He returned to the Sox and was able to show his return to form when he threw a no-hitter against the Kansas City Royals in 2008. His recent 1-hitter was only his 3rd complete game so when Lester decides to go the distance he does it in style.

He's tossed a no-hitter, been named a 2-time All-Star, and was a key part of the rotation that swept the Rockies for the 2007 World Series Champion Red Sox. The lefty has already crossed the 1,100 strikeout threshold and is approaching 100 career Wins with a career era below 4.00. He's got a chance to be something special longterm for the Red Sox so I'll be interested to see the back end of his career play out. 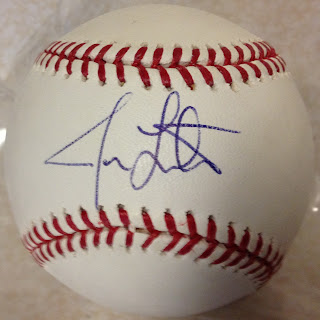 This is one of the few autographs I've actually gone and purchased of a baseball player. I had the opportunity to pick it up off a fellow grapher from Angel Stadium as he received it was part of a lot purchase and knew I was a big Red Sox fan so he offered it to me. I gladly picked it up for a reasonable price and it's now a project for me to obtain a ball of Josh Beckett and Dice-K to go along with my Lester, and Curt Schilling balls so I have a ball from each member of the 2007 World Series rotation.
Posted by RJ at 1:21 PM