Previously I wrote about how I was able to get a Jeff Francoeur autographed baseball, and how "Frenchy" is one of the nicest MLB players I've ever been able to meet. The outfielder is a definite fan favorite where ever he's playing and it's easy to understand why once you have the opportunity to see him interact with fans around the park.

Francoeur was drafted by the Atlanta Braves in the 2002 MLB draft with the 23rd pick in the first round. He debuted 3 years later in 2005 and has carved out a solid career with his bat and especially his arm. He's crossed the 1,100 Hit and 125 Home Run plateaus while earning a Gold Glove in 2007 for his work in the outfield. He is ranked 3rd for outfield assists among all active players for gunning down opposing runners.

I took this photograph of him during the Opening Series when the Royals and Angels played against each other in Anaheim. Frenchy was nice enough to autograph this 8x10 photo and inscribe "GG 07" on it for me. Even though he consistently is amongst the league leaders for outfield assists I'm not sure if he'll be earning many more Gold Gloves, but if he does I'm sure he'll be kind enough to inscribe any other award he wins. 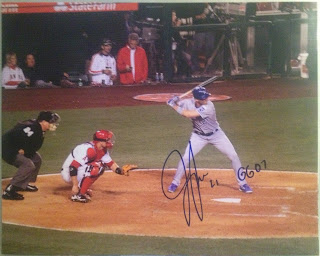 Jeff Francoeur autographed this 8x10 for me when the Royals played the Angels during the 2013 season in Anaheim.
Posted by RJ at 7:07 PM