Yeah no frilly title for this one out of respect for the hard nosed no frills but all enjoyment playing style outfielder Torii Hunter brings to the game.

Torii Hunter was drafted by the Minnesota Twins with the 20th pick of the 1993 MLB draft. He was selected one pick ahead of catcher Jason Varitek also taken by the Twins, making it one of the defensively greatest rounds maybe in the history of a single franchise. Hunter has crafted a career off his glove and bat, but his glove work is clearly his trademark. Though still knocking out career stats he has a very impressive line to look at with 1,100 RBI's and over 2,025 hits. He has taken away countless home runs from opposing hitters notoriously climbing the wall to earn 9 Gold Gloves to go with his Silver Slugger and 4 All-Star nods. His leadership is also a strong asset that the Twins and especially the Angels enjoyed when he was mentoring a rookie Mike Trout before he left to search for a World Series ring with the Detroit Tigers. 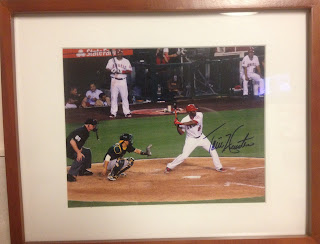 Torii Hunter autographed this 8x10 photograph for me at Angel Stadium and I'm glad to say he was impressed with the camera work telling me it was a nice shot before he signed it. I'm especially proud of how it came out and of the great looking signature so I made sure to have it matted and framed up.
Posted by RJ at 8:39 PM