Moustakas. Mike Moustakas. A name that definitely lends itself to being a ball player, let alone a popular fan friendly one. I have written about getting Moustaskas' autograph before in a general sense since I included an autographed 8x10 I took during the Opening Series for the 2012 season. I've left out some pretty sweet items that I finally was able to complete this past series.

Moustakas debuted during the 2011 season at Angel Stadium. It was nice for his debut to come in Anaheim since Mike was a graduate of Chatsworth High School and owned several California high school baseball records. Since he's a local boy he had plenty of family on hand to watch him debut in the MLB. His debut game was on and I was actually about to get a ball Moose hit during his BP. Not only was I able to snag a ball from his BP but I was able to get Moustakas to autograph the ball before the game on the sweetspot. 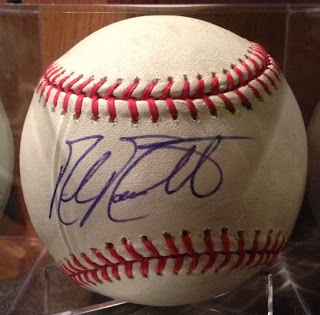 I posted previously about how nice and down to earth Moose is when he signed this 8x10 of him from 2012 Opening Day. He's a consistent signer when he's in Anaheim and I was able to get this Mike Moustakas autograph on my ticket from his MLB debut game.

Hopefully Moose will develop a more consistent bat, 2012 looked to be a breakthrough year for him and he even was nominated for a Gold Glove award, but he's had a bit of a regression year in the first half of 2013. Seeing as he was the 2nd pick of the 2007 draft I'm sure the Royals hope he can put it all together and will give him everything he needs to reach his fully potential. I think he's got the strength and tools to develop into a solid career 3rd baseman.
Posted by RJ at 11:13 PM