My post about Torii Hunter had me thinking about another defensive great that I had been able to secure the autograph of catcher Ivan Rodriguez. I'm not sure if he's going to be in the Hall of Fame, but he's definitely in the hall of great.

Ivan "Pudge" Rodriguez was signed by the Texas Rangers as an amateur free agent in 1988. He debuted at the tender age of 19 in 1991 for more than a cup of coffee appearing in 88 games. It was history from then on with him becoming a mainstay behind the plate until he retired after the 2011 season.

He was a 14 time All-Star, was awarded an astounding 13 Gold Gloves, 7 Silver Sluggers, named the 1999 AL MVP and  won the 2003 World Series Championship. He collected 2,844 hits, 1,332 RBI's and 311 Home Runs throughout his career as one of the top offensive catchers to play the game. He brought a serious blend offensive power with his key defensive play that made him a popular player throughout the 90's. When he retired he made headlines again for throwing the ceremonial pitch in an unique way, actually moving behind the plate to catch a strike from Michael Young after he signed a one day contract to retire with the Rangers. 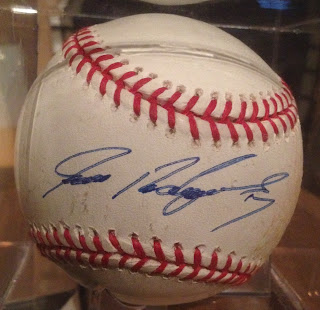 I was able to get this Ivan Rodriguez autographed baseball during interleague play at Angel Stadium while he was on the Washington Nationals in 2011.
Posted by RJ at 11:23 PM