This post is a bit of a combination book review, player profile, and autograph highlight.

Angel stadium held signing for former pitcher Jim Abbott after he released his book "Imperfect: An Improbable Life" in 2012. I hadn't been able to get Abbott's autograph previously so I jumped at the chance when I heard he would be at the stadium signing. I had been under the impression that with purchase of the book one outside item would be allowed to get signed, but when the signing actually began that wasn't held to be true. I was semi disappointed but I understand that Abbott was there as more than a former ball player and was there as a writer so wanting to get books signed is very understandable.

Abbott was taken by the California Angels 8th overall in the 1988 MLB draft and debuted in the majors without having played any rookie ball. His previous playing experience ranged from high school, Michigan, the Pan American Games and helping to win a "gold" during the demonstration sport debut of baseball in the 1988 Summer Olympics. His career lasted from the 1989 season till 1999 with Abbott spending different stints with the Angels, Yankees, White Sox, and Brewers. He'd retire with 87 Wins, a 4.25 ERA and 888 Strikeouts. He threw a gem for the Yankees pitching a no-hitter against the Indians on September 4, 1993.

Abbott's co-author Tim Brown helped spin his own gem when crafting Imperfect. It's a book that I honestly had a hard time putting down as I was drawn deeper into the narrative. Stories from Abbott's past growing up, playing amateur ball, and thoughts on life and those who inspired him to overcome adversity are intermixed with the story of his no-hitter inning by inning. It's an enthralling read when you begin to see the genuine heart and true grit he maintained to become not only the pitcher he was, but the man. I'm glad to have been able to get Mr. Abbott's autograph for an unusual reason. I'm glad I got his signature because it made me read a book I might have otherwise declined to purchase and read. I'm very happy to have met him and add a Jim Abbott autographed book to my collection. 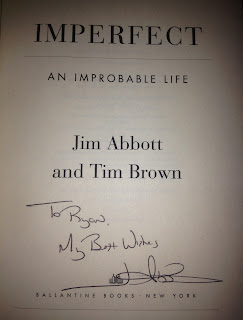 Ironically the previous autographed books I highlighted were signed by author Ray Bradbury. Bradbury's most well known work Fahrenheit 451 was also published by Imperfect's publisher Ballantine books. If you're looking for a good summer read I highly recommend picking up a copy of Abbott's book. I'm very pleased to have this on my shelf next to my other signed books and think it's a nice change of pace for a Jim Abbott autograph.
Posted by RJ at 8:35 PM