Another player who needs no witty tagline or introduction, is Dodgers' ace Clayton Kershaw. Kershaw is a man who needs no real introduction because his stuff on the mound has spoken for him since he broke into the Majors.

Kershaw was drafted by the Los Angeles Dodgers with the 7th pick of the 2006 MLB Draft. It's a choice regretted 5 of the 6 teams with only Evan Longoria taken by the Rays panning out to a reasonably comparable level of success. And even then the Rays would be pushing it to say they wouldn't trade places with the Dodgers. Since his debut in 2008 Kershaw has been the elite of the elite with his only real peer being Detroit Tigers ace Justin Verlander. He's an All-Star, Gold Glover, Cy Young winner and already topped the 1,000 strikeout plateau. Without a doubt he's going to be a pitcher to remembered from his generation and it's always special when he takes the mound. 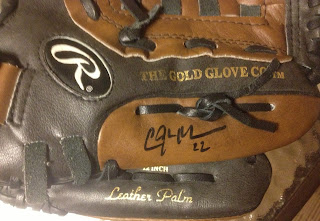 I got this Clayton Kershaw autographed glove before an exhibition game between the Dodgers and Angels at Angel Stadium. I had originally tossed him a baseball hoping he would switch from the sharpie for a pen but he ran with the black sharpie and autographed a side panel. I wasn't going to complain too much seeing as it's still my first Kershaw autograph so I can check him off my list. As I was putting my ball away I realized Kershaw was still knocking out autographs for fans so I asked if he'd sign my glove too. He nodded and signed the leather for me. It's awesome and I'm debating retiring this glove since I already have a new one except for pulling it out once in a while since I don't want the auto to fade very quickly. Hopefully Kershaw is a Dodger for life and continues at his level of success to be an all-time great.
Posted by RJ at 6:47 PM