Recently I was able to get starting pitcher Ervin Santana's autograph. It was nice to get Ervin's autograph since it was only the second time he had signed for me despite him being on the Angels for so many years. Either through bad timing or positioning I seemed to miss out on Ervin when he was an Angel, so it was nice to get him to sign as a member of the Royals.

Ervin was signed as an amateur free agent in 2000 by the then Anaheim Angels. He debuted for the Angels in 2005 as a starter and never turned back holding onto a spot in the rotation for 8 seasons with the team. He ran into struggles though and the Angels traded Santana to the Kansas City Royals after he led the league in Home Runs allowed. So far the move has been good for Ervin as he has revamped his pitching and is having a successful first half. Ervin is one win from crossing the 100 mark, has 1200 Strikeouts, has been an All Star, and most notably threw a no-hitter during the 2011 season against the Indians. 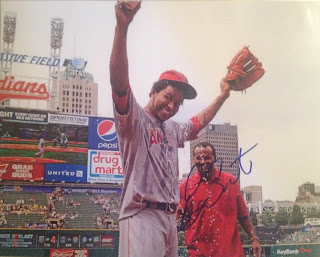 I was able to get Ervin to autograph this 8x10 photo of him celebrating his no-hitter when the Royals played the Angels during the 2013 season.
Posted by RJ at 11:31 AM