Recently I mentioned being able to pick up a Kendrys Morales Game Used Baseball bat through a sale the Angels Foundation had. I was pretty excited to make the purchase and pick up a bat from a player I liked who was a decent slugger. I was nervous though about being able to get it autographed as throughout the years I had never been able to get Kendrys to sign for me. He was a notoriously tough autograph to get and if he did by chance sign I was always somewhere else and missed the chance. The Mariners came into town for a quick series and I knew I had a limited window to get the bat signed since baseball bats are not allowed inside of the stadium, so I had to get it signed pre or post game.

After the first game of the series I was able to track down Kendrys and called out to him that I had his game used baseball bat. He got into his car without saying anything though, and I thought I missed my chance. I was extremely excited and surprised then when his driver started to pull away before stopping a few feet away from me. Kendrys lowered his window, pointed at me and waved for me to come over. I pretty nervously walked over to the car and handed him the bat and marker. He autographed the bat for me while I said thank you and he just nodded before handing the bat back to me.

Though I have my RBI Collecting custom bat, this is my first player used baseball bat and I was pretty hesitant about getting such a tough signer for my first bat, but I think Kendys is a good player so I took the chance. I'm extremely happy that I did and I'm really grateful that he took the time to stop and autograph the bat. 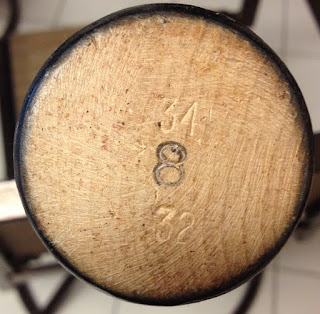 I've had a few people questioning me on the bat because the normal photos you'd see of him batting is with a different brand. So I went to Getty Images and started doing some research. During the 2012 season Kendrys switched to using Trinity baseball bats for a while more than likely because of the success Mark Trumbo was having using Trinity. I'm not 100% which bat it is that I picked up but he does use at least 4 different Trinity bats when I combed through the archives. The markings, scuffs, and position of the MLB dot test look to match one used batting when they played the A's.  It's just one more great example of the quality work done by the Trinity Bat Company, and I'm more than pleased to have this Kendrys Morales autographed baseball bat in my collection. 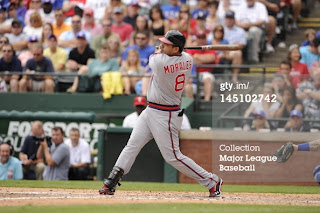