In more ways than just one. I was able to get a Baltimore Orioles star center fielder Adam Jones autographed baseball. It wasn't necessarily the easiest autograph to obtain and definitely involved some stadium antics, but I was able to get get the elusive Jones' signature on my baseball.

Adam Jones was drafted by the Seattle Mariners in the 2003 MLB draft as the 37th pick. He was taken as a pitcher/shortstop but eventually moved to the outfield at the Mariners request. He debuted for the Mariners in 2006 but was traded to the Baltimore Orioles in 2008. Since moving to the Orioles he has shined as star for them, so far being a 3-time All-Star and winning 2 Gold Gloves. He shows a strong blend of speed and power with more than 100 Home Runs and 60 Stolen Bases. His playmaking ability at the plate and in the outfield helped convince the Orioles to give him the largest contract in team history with a 6 year $85 million extension. 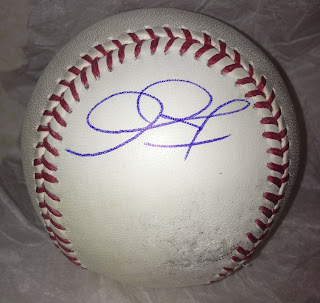 I was honestly semi disappointed in this autograph. The ball is a commemorative baseball with the 20 year anniversary logo for Camden Yards that I was thrown by Rays pitcher Jake McGee. It's a clean ball with a perfect logo that I held back for almost a year to get signed by an Oriole of note. Unfortunately the stadium shenanigans had Jones in not the greatest mood while he signed so he paid no attention to me when I asked for him to sign under the logo. Yes at least I got the autograph, but it still could have been a great looking piece for my collection with a nice story behind the ball itself. At least I was able to get  an Adam Jones autographed baseball. Thankfully it was still a good day as I got to watch a good game with Kyle of Addictive Artwork, David and my other friends.
Posted by RJ at 7:47 PM