With the Angels out of town I went to see the Angels' Inland Empire 66'ers play against the Dodgers' Rancho Cucamonga Quakes. The 66'ers caught a pretty serious beat down from the Quakes' hitters but it was nice to go catch some local ball and enjoy the game for the game.

Darnell Sweeney hit for the cycle for the Quakes and 66'ers outfielder Zach Borenstein finished a triple short of his own cycle. It was a fun night and I got thrown my first minor league baseball a Rawlings Cal League ball from Zach after the game. 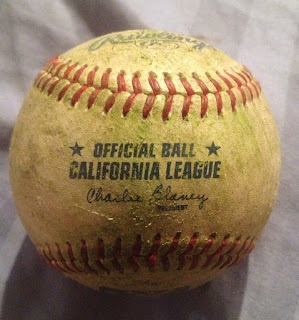 The ball's pretty beaten up but I think it's some nice character for it. I didn't have Borenstein autograph the ball but I'm thinking the next time I go to catch an Angels' big leaguer out rehabbing at Inland Empire I'll bring the ball along for him to sign. Great night with a nice pick up, I wish Angel games were like this too.
Posted by RJ at 11:05 PM