This is one of my all time favorite players, who I think could be inducted into the Hall of Fame eventually though maybe not his first time on the ballot for Cooperstown in 2013. Pitcher Curt Schilling is in my eyes one of the all time greats who deserves a place in the hall.

Schilling was drafted by the Red Sox in the 2nd round of the 1986 draft, but made his debut for Baltimore in 1988. He was then traded to Houston for a year and then Philadelphia, where he spent the majority of his career developing into one of the most dominant control pitchers mixing an overpowering fastball with brutal off speed offerings. After his development years in Philadelphia Schilling went to Arizona where he was a key cog in the Diamondbacks success. With Randy Johnson in Arizona, Schilling helped the DBacks upset the Yankees in 2001 for one of the most memorable World Series in the past few decades. The victory over the Yankees was a dramatic one and gave Arizona their first franchise World Series title.

The Red Sox aggressively targeted Schilling once he hit free agency and Theo Epstein was able to steal him from the Yankees and bring him to Boston. Schilling was immortalized with his post-season success that helped bring the Red Sox to a World Series Championship victory in 2004 to end the Curse of the Bambino. He built on the success and helped guide the growing Red Sox core to another ring in 2007.

When finally finished with his career Schilling stands in elite company. He has a 216-146 record supported by a 3.46 ERA and 3,116 Strikeouts. A 6-time All-Star he has been World Series co-MVP, NLCS MVP, and a key piece of 3 World Series Champion rotations. Two of those victories are key highlights in sports if not their respective franchise histories. His infamous "bloody sock" incident during the 2004 series has only further increased his intrigue. If he isn't a Hall of Famer, I'm not really sure who from his era is. 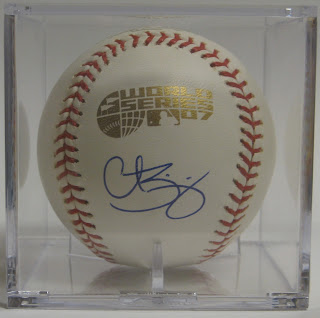