The first person elected to the Angel Team Hall of Fame was a dynamic second baseman named Bobby Grich.

The Michigan native was taken by the Baltimore Orioles in the 1st round of the 1967 draft with the 19th overall pick. He developed quickly and debuted in 1970 but did not become a regular starter until 1972. He signed with the California Angels in 1977 as a free agent and remained with the team until his retirement after the 1986 season.

While playing he was known for his steady defense and range as well as a strong bat from the middle infield. After his 17 seasons he was a .266 hitter supporting a .371 OBP and solid pop with 224 Home Runs. He scored 1033 Runs with his speed though he only stole 104 Steals and was caught stealing 83 times.

The Angels recognized his 6-time All-Star status, 4 Gold Gloves, and Silver Slugger award as well as his numerous contributions to the club by inducting him into the team Hall of Fame. Not only did they induct him into the team HOF, but he was the first member to be inducted. He still maintains an active relationship with the Angels working in the front office and can be seen at team events or around the stadium.

I was able to get Bobby Grich's autograph on the sweet spot of this baseball through the Angels' 50th anniversary celebration during the 2011 season. He was kind enough to add inscriptions for those who asked. I thought about asking for his Gold Gloves, but the "6x All Star" looked too cool on a friend's ball that I had to ask for it too. 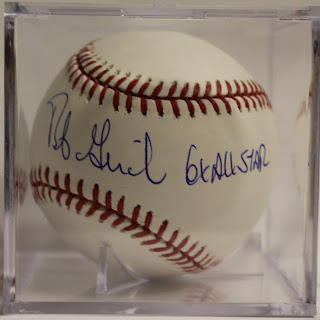 I was able to get Bobby Grich to sign this 1987 Topps for me at the Jered Weaver press conference in front of Angel Stadium where the Angels were announcing his contract extension. The whole day was a nice event for the organization and several alumni were on hand to watch the event. 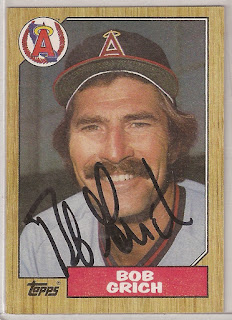