During the 2011 season I was able to get former pitcher and pitching coach Don Cooper to sign for me.

His pitching in the Majors may not have been amazing, but he has a great knowledge of the game itself. Like the old saying goes, "those who can't do, teach." And teach he does as the Chicago White Sox pitching coach since 2002. He was a member of the coaching staff when the team won the 2005 World Series. His pitching staffs have been impressive churning out consistent starters that are reliable though not many have reached the elite level.

One of the more impressive feats accomplished by the pitchers under Cooper's tutelage are the number of gems churned out. The staffs may not always shine but Cooper has helped turn out some diamonds in the history of the game. Since he was named pitching coach there have been 21 MLB no-hitters or perfect games, and Cooper has overseen 3 of them. Mark Buehrle tossed a perfect game and no-hitter while Philip Humber threw a perfect game. An especially impressive mark since there have been only 19 perfect games ever thrown in the MLB and Cooper coached 2 of them. 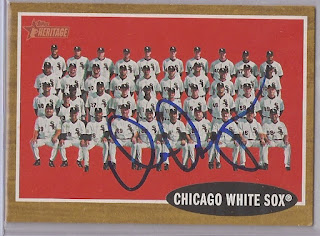 I was able to get Don Cooper's autograph on this 2011 Topps Heritage White Sox team card for me in person at Angel stadium when the team was in town during 2011 to play against the Angels.
Posted by RJ at 8:51 PM