In 2011 went to the Pittsburgh Pirates, which they used to select UCLA starting pitcher Gerrit Cole.

Cole is a native of Southern California having been born in Newport Beach, CA and attending a private high school down the freeway in Orange County. In 2008 he was selected by the New York Yankees in the 1st round of the draft, but declined to negotiate with them despite a believed offer prepared to the tune of $4 million.

Cole attended UCLA on a collegiate scholarship and helped the Bruins become one of their best teams in school history. In 2010 they achieved a 51-17 record, the best achieved in school history. The season continued to roll on with Cole helping the Bruins advance through the 2010 College World Series, eventually being defeated in the NCAA Championships Series.

After Cole was drafted by the Pirates first overall he and his representatives didn't sign with the organization until 15 minutes before the deadline. The deal was reported to be worth $8 million, which could prove to be a bargain seeing as his potential could help turn the Pirates into a force to be reckoned with in the model of the 2012 Washington Nationals. The deal was signed too late in August for Cole to take part in the minors and he has pitched in the Arizona Fall League recording solid numbers. 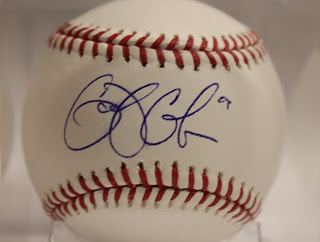 Cole made an unexpected appearance at the Cory Hahn Trinity Bat Benefit in Orange County and was kind enough to sign this ROMLB for me on the sweet spot. It was really nice of him to take the time to appear at the benefit and he could have avoided signing for the fans, but signed autographs for fans who recognized him. Which with the addition of some facial hair was actually a little bit of a task, but he was really down to earth and lowkey which made getting Gerrit Cole's autograph that much cooler. 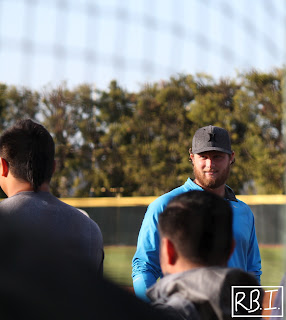 He was really personable and polite to everyone and the whole event was a great day with Cole's autograph just the icing on the cake. Cole will be debuting for the Pirates during the 2013 season and is expected to help continue the turn around in Pittsburg to make the team relevant again.

Now that Cole has debuted in the MLB it's been great being able to see this Gerrit Cole autographed baseball on my shelf as a big leaguers ball, especially one who has been successful with him going 4-0 so far in his debut topping front line talents Jered Weaver, Tim Lincecum, and Zach Greinke.
Posted by RJ at 1:04 PM