Regular readers probably are already aware of my previous post regarding Hall of Famer Al Kaline. If you aren't a regular reader and don't want to read the post, it essentially boils down to he has some weird signing habits in person and through the mail and I wanted to see how I'd do.

Okay, usual preamble about Mr. Tiger even though I want to skip to the good stuff. Hall of Famer class of 1980 (88% the vote) played for 22 seasons only for Detroit, an 18-time All-Star, and nabbed 10 Gold Gloves. 3007 hits from a career .297 average knocked in 1583 RBI's that won a 1968 World Series and got his #6 retired by the Detroit Tigers. Want to know the real good stuff? Then seriously, read the other post. 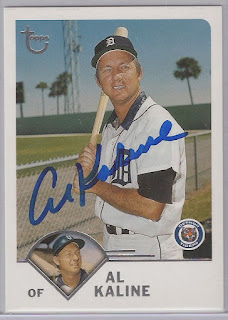 Yes it is a very nice clear blue signature on the card. Yes it's great to have a Hall of Famer added to my collection. But let's be honest. This is the exact same signature that I could have acquired with a letter and $5...maybe $10 and an extra set of postage. For $20 I could have tracked down a certified Topps autographed card on ebay. An extra $10-$15 dollars didn't get an "HOF" or "GG" inscription? I don't think Garret Anderson even charges that much for an inscription and he only signs like twice a year and in person only. Twenty bucks and my index card wasn't even returned to keep the envelope stiff let alone with a "Thanks" scribbled on it.

Now is it a little petty to complain about a Hall of Famer signing for so cheap? Maybe. But it's the principle that has me not so pleased with how this safari went. By his "normal" habits, this could have gotten 2-4 cards signed with the same autograph. Instead my letter went unanswered and my index card wasn't even sent back.

It's not that I was expecting an extra signed card, inscription, or change. But I was hoping to find Mr. Kaline on the side of the fan and not send a completely indifferent response. I guess I was hoping for the Hall of Famer to show something more and act a little classier than a nobody minor leaguer at a card show would. Is that so wrong? Am I expecting too much from a Cooperstown inductee?