With baseball's week long opening series' beginning and the Angel's Opening Day tomorrow, I was wondering what would be the final return for the off season. It's a fairly appropriate return as former player, Angel coach and Milwaukee Brewers manager Ron Roenicke.

Roenicke was a 1st round pick by the Los Angeles Dodgers in the 1977 June secondary draft. Despite being such a high pick, taken 17th overall he did not make his MLB debut until 1981. Roenicke spent 8 seasons split between 6 teams, and was never able to really capitalize on the playing time he was given as a sometime starter, utility outfielder, and pinch runner. At the end of his career he sat on a .238 average and 17 Home Runs.

Roenicke returned to the Dodgers as a coach and manager throughout the organization at the Major and minor league level. Eventually he left the Dodgers to join the Angel organization as third base coach and was a member of the championship team. After Joe Maddon left to become the manager of the Rays he was promoted to bench coach. His time with the Angels through their dominant regular season runs through the early 2000's gave further credibility to his resume and he continued the Mike Scioscia coaching tree becoming the Milwaukee Brewer's manager. In his first year as a manager he took the Brew Crew to the NLCS, and it'll be interesting to see how he keeps the club pushing forward in the wake of the franchise losing its Prince and the reigning MVP having his crown tarnished by scandal. 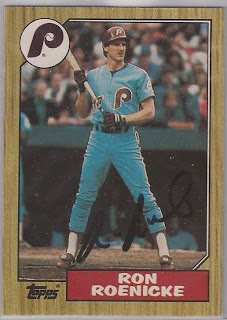 Roenicke signed this 1987 Topps card for me sent c/o the Brewers at Spring Training in 43 days.
Posted by RJ at 6:16 PM