Balk 8 - A pair of off topic autographs

Even though baseball is my big passion and focus for collecting, living in Southern California does have it's occasional perks by being able to run into various sports athletes and celebrities when you're just out and about.

This is post is a dual post since they're kind of related but I did get each signature on separate days. While most of Southern Californians are now flying their "Clipper Nation" flag, I had mine up a bit longer. Last season I went to 70 something baseball games and one of the main reasons I would miss a game was work or to go to a Clipper game.

Last season I was with my family getting a late bite to go and some gas for the trip home after a Clippers-Suns game when my dad looked out the window at a really nice car pulling up to get gas. When the door opened he immediately said, "Hey, that's Brian Cook."

We waited a minute for him to get situated and then asked Brian if he could sign my ticket stub and told him how happy we were that he was back in LA after a few seasons away. Though I'm a Clipper fan, Laker games were always predominantly what made it onto TV and Cook was a 1st round selection by them in the 2003 Draft. There are few things as exciting as a momentum changing 3-pointer and through his Laker years he was a talented 3-point specialist. Brian Cook autographed my ticket and we said thank you before walking back to fill up his tank and head home.

This season Brian started with the Clippers, but as many of you are aware the fortunes of the team has drastically changed with the addition of Chris Paul and his role was reduced until he was finally traded. One benefit of the changing fortunes of the Clips, is the addition of more high profile fans. On my way into a game against the San Antonio Spurs, I spotted Rainn Wilson, better known as Dwight Schrute, on the way into Staples Center. I was able to get a Rainn Wilson autograph on one of my cards. 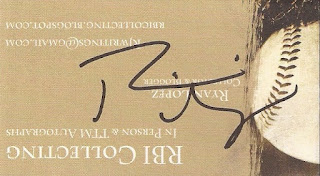 Like I said, living here has some perks. Not a bad pair of random autographs to add to the collection.
Posted by RJ at 8:20 PM