It's been a bit since I posted a TTM reply, mainly because I haven't had any responses since baseball season started besides the adventure with Al Kaline. Needless to say I'm not overly pleased with my luck lately. One thing that I got very lucky with a few months ago though was a response from Cy Young winner Doug Drabek.

Drabek is a Texan taken by the Chicago White Sox in the 11th round of the 1983 draft. Despite pitching well through the minors for the White Sox he was included in a package to the New York Yankees.  He would eventually be called up with the Yankees in 1986 as a reliever who joined the rotation. He was then traded to the Pirates by the Yankees where he had his most successful years. He'd pitch for the Pirates primarily before a few years split between the Houston Astros, Orioles, and White Sox.

When he retired after 13 seasons in the MLB Drabek had finished an impressive career. He had a 155-134 career record supported by a 3.73 ERA and 1594 Strikeouts. In 387 Starts he threw 53 Complete games and an impressive 21 Shut Outs. He was an All-Star with the Astros, but won the Cy Young in 1990 with the Pirates when he was also named the NL TSN Pitcher of the Year.

His abilities were passed down to his son Kyle a well-known pitching prospect who was the key piece in the Phillies-Blue Jays Roy Halladay trade. 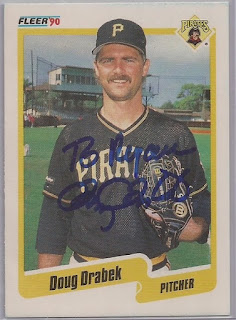 If you have noticed I'm pretty fond of getting 1990 Fleers signed. The backgrounds tend to be nice and the white border helps autographs pop. I'm an even bigger fan of getting cards from the year the player did something big, and if you notice the card is from the same year he won his Cy Young award.

Mr. Drabek was kind enough to personalize the card sent to his home and send it back to me after 8 months.
Posted by RJ at 8:58 PM