The primary goal and what really sold us on going was news that Bobby Wagner's teammate Russell Wilson was supposed to be in attendance. The handler at the door was apparently from his passing camp and said he would be coming to the event latter on so we happily made our donation and went inside.

Now here's where things get a little murky. The event was great in that it had all you can eat ribs, chicken and sides and unlimited cocktails with a decent DJ. Everyone seemed to have a good time. In attendance to begin the event with Bolden and Wagner was Broncos safety Duke Ihenacho and Steelers linebacker Chris Carter. Bolden, Duke and Carter were great being really social, very funny and generally everything you would expect from celebrity hosts at a charity event.

I started the day off getting Omar Bolden's autograph on my 8x10 photograph. It was great to meet and talk to him since I'm a big Bronco's fan and he had a great season for us. 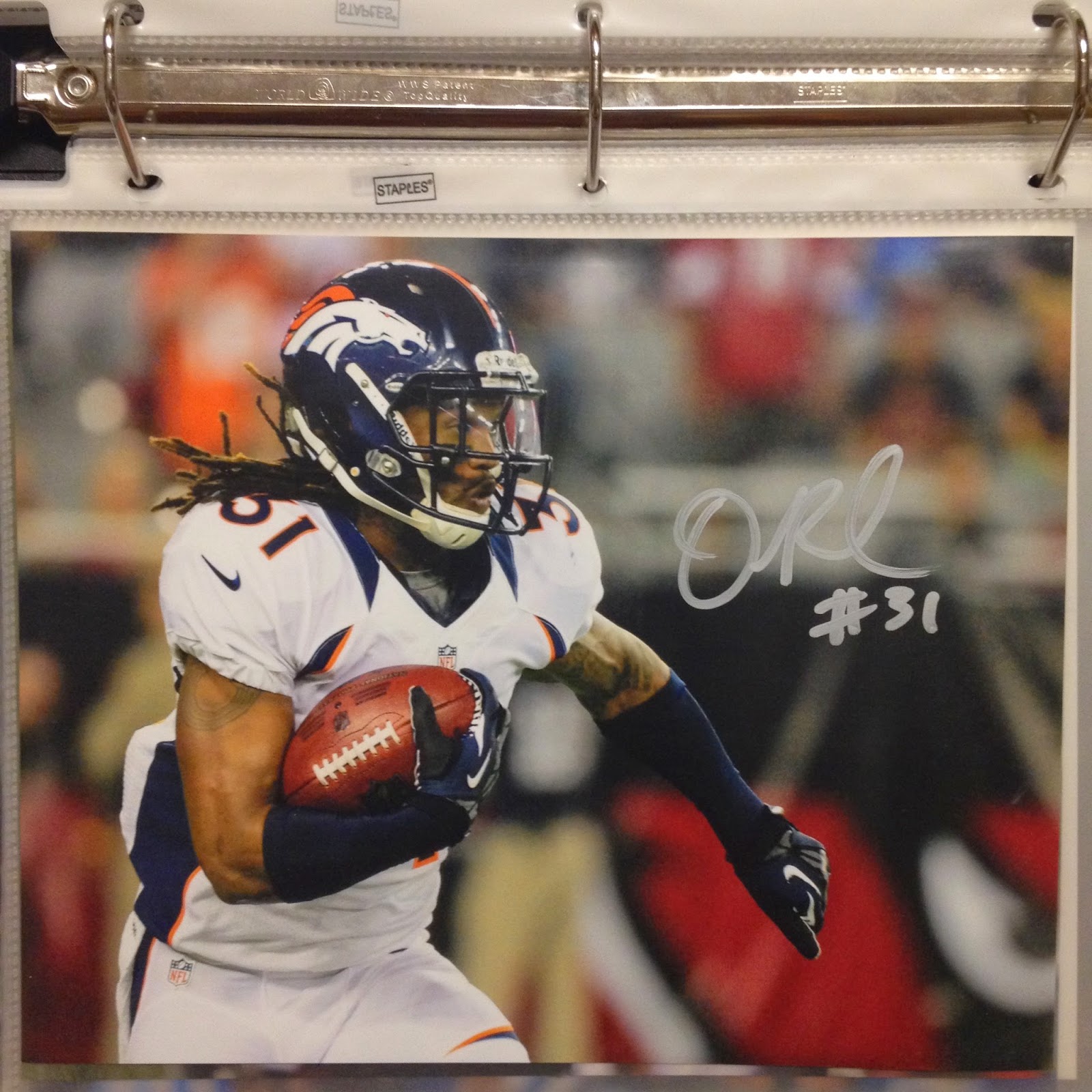 After Bolden I got his fellow Broncos' safety Duke Ihenacho's autograph on an 8x10. I'm not really sure why but he signed it "#27" so maybe he's changing his number next season? But it doesn't make much sense since the photo he signed has number 33 on his jersey. It was that kind of day. 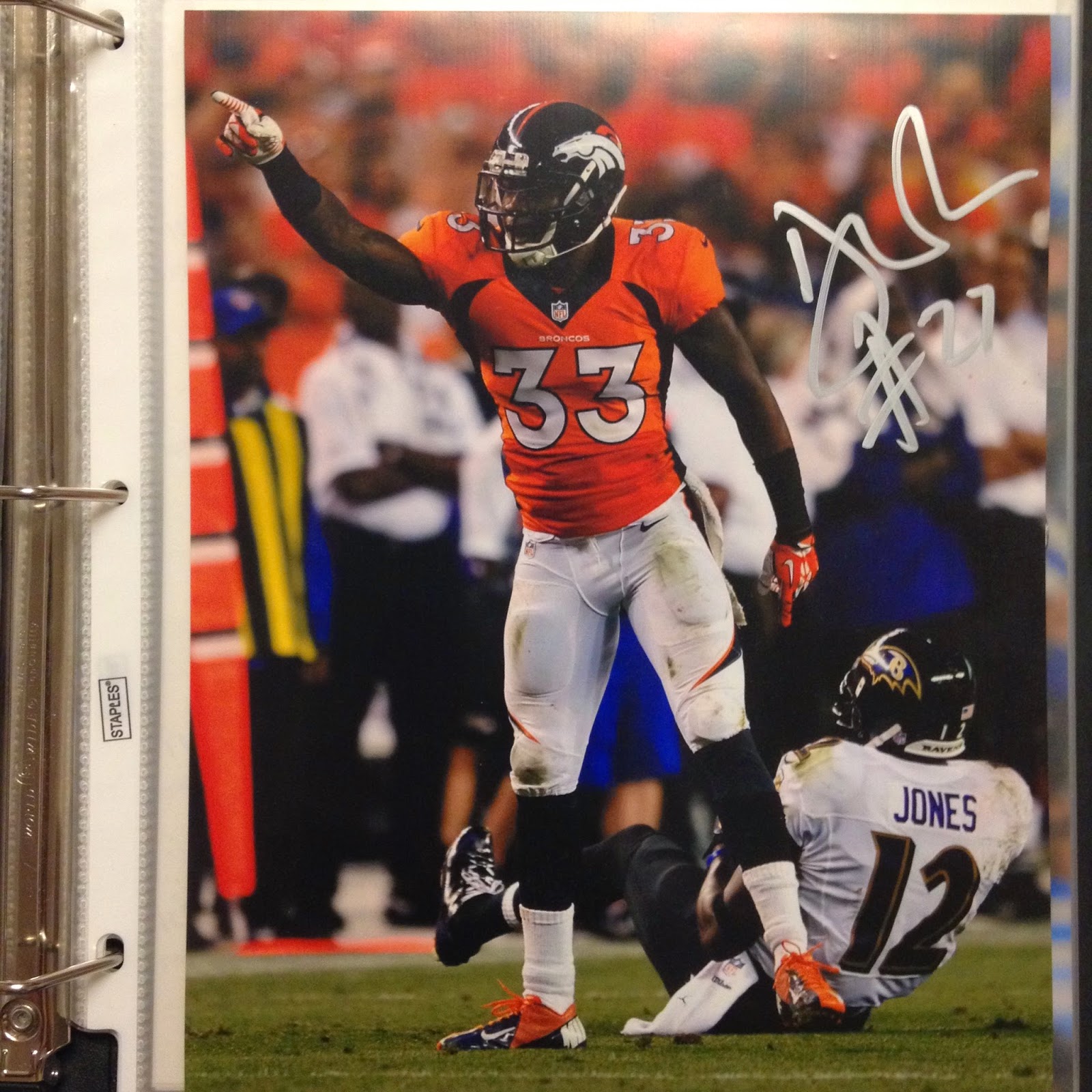 After Inhenaco signed not much action happened besides taking photos and goofing off with really awesome guy Chris Carter. He was one of the highlights of the event hanging out with us but we didn't bring anything for him. That was until we got Bobby Wagner's attention. Wagner came over to sign for us and he wasn't happy about it at all. He was short with us, seemed irritated we had different color pens for our different photos and would only sign one item each. I understand we didn't spend thousands to be there like some of the participants, but we made a donation just like every other person who was inside. No one tried dropping more than 2 items on him it just seemed unnecessary for him to come off like a jerk to us and to give us a rough time. 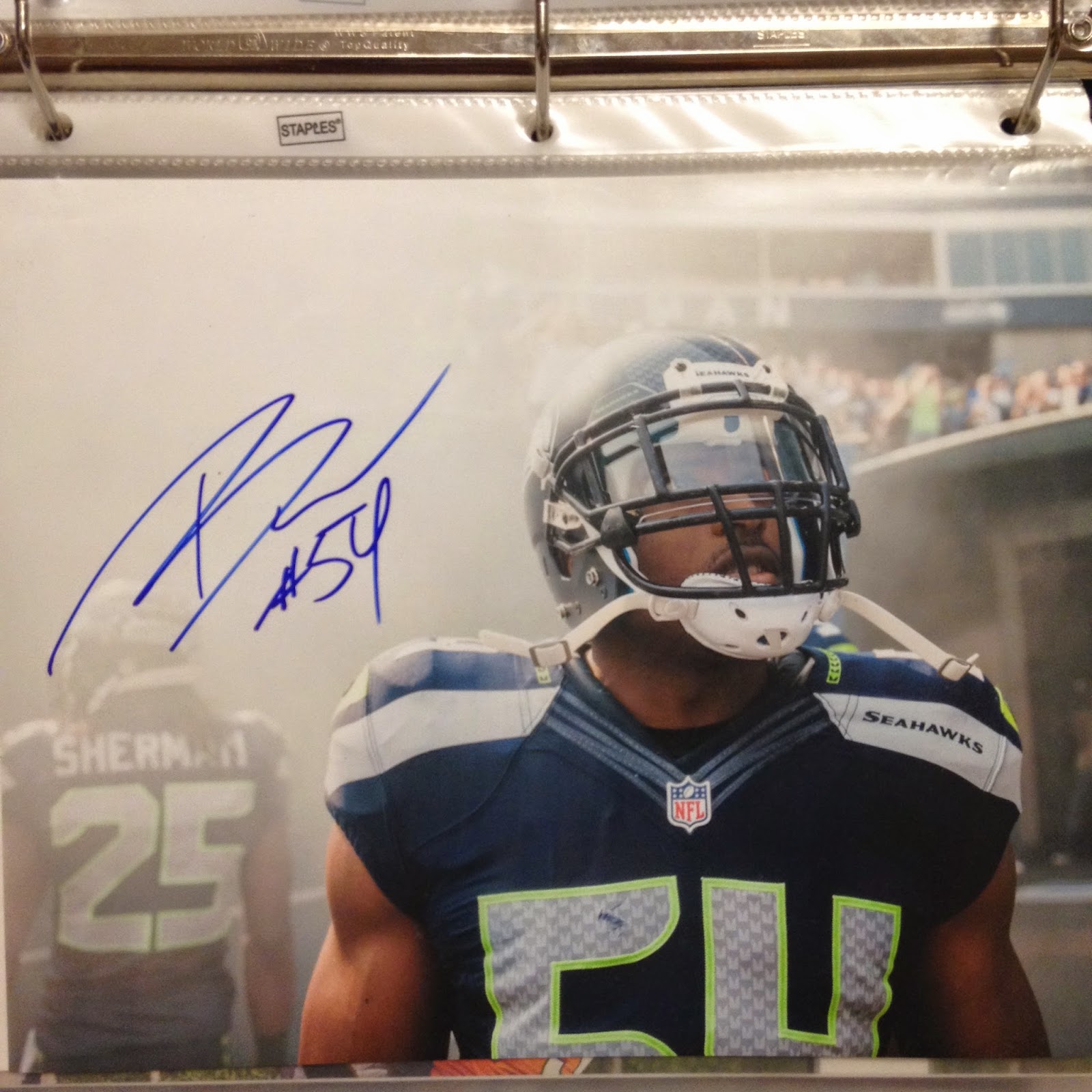 I'm not really sure what's the real difference between us asking him to sign our photos and other attendees asking him to sign their tshirts. We came prepared to meet the host of the event and wanted a nice item from the event. We donated just as much as some of the other guests who were treated much more politely. Maybe Bobby didn't want us at the event and it shows, but you signing two photos and not glaring when I ask for a photo together makes this a better event that draws more graphers. Yeah you'll have to sign more but you'll make more money in donations for the American Heart Association. I thought that was the point. 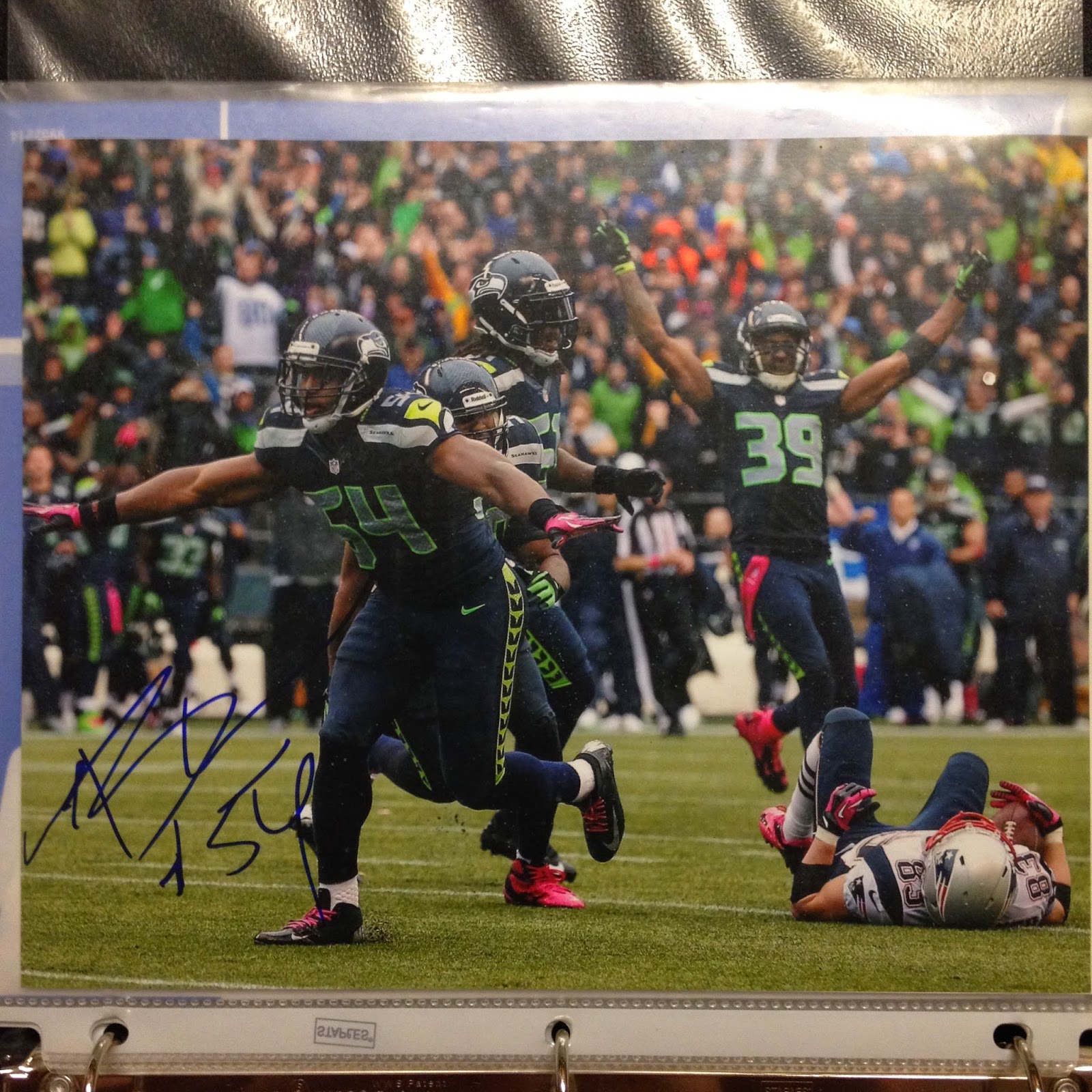 Matt didn't have anything for Wagner so he helped me out and got my other Bobby Wagner photo autographed. As you can see theres a random mark under the "B" because Wagner marked the photo with the sharpie before signing it. I appreciate the help in getting it done, but come on Bobby. Really? Regardless I'm glad to have both my photos done so I'm finished getting Bobby Wagner's autograph and have a Superbowl Champion's autograph in my collection.

Russell Wilson never ended up showing up. Twitter showed us he went out to dinner somewhere by the beach instead of showing up to his teammates event. A teammate who had just gone and spent time at Wilson's own camp the day before. Nice support right?

Someone who did have a lot of support was Darren Collison. As the event was wrapping up and we were walking out the door I literally shoulder checked Matt to stop walking as Collison walked right through the front door inside past us. He made the drive from LA to Rancho to spend maybe 25 minutes saying hi to the guests still in attendance taking photos and signing for everyone who was left and asked him. We overheard him saying he didn't realize that the event ended so early and he seemed genuinely surprised. But it was great to see him come by and immediately make himself available to fans. 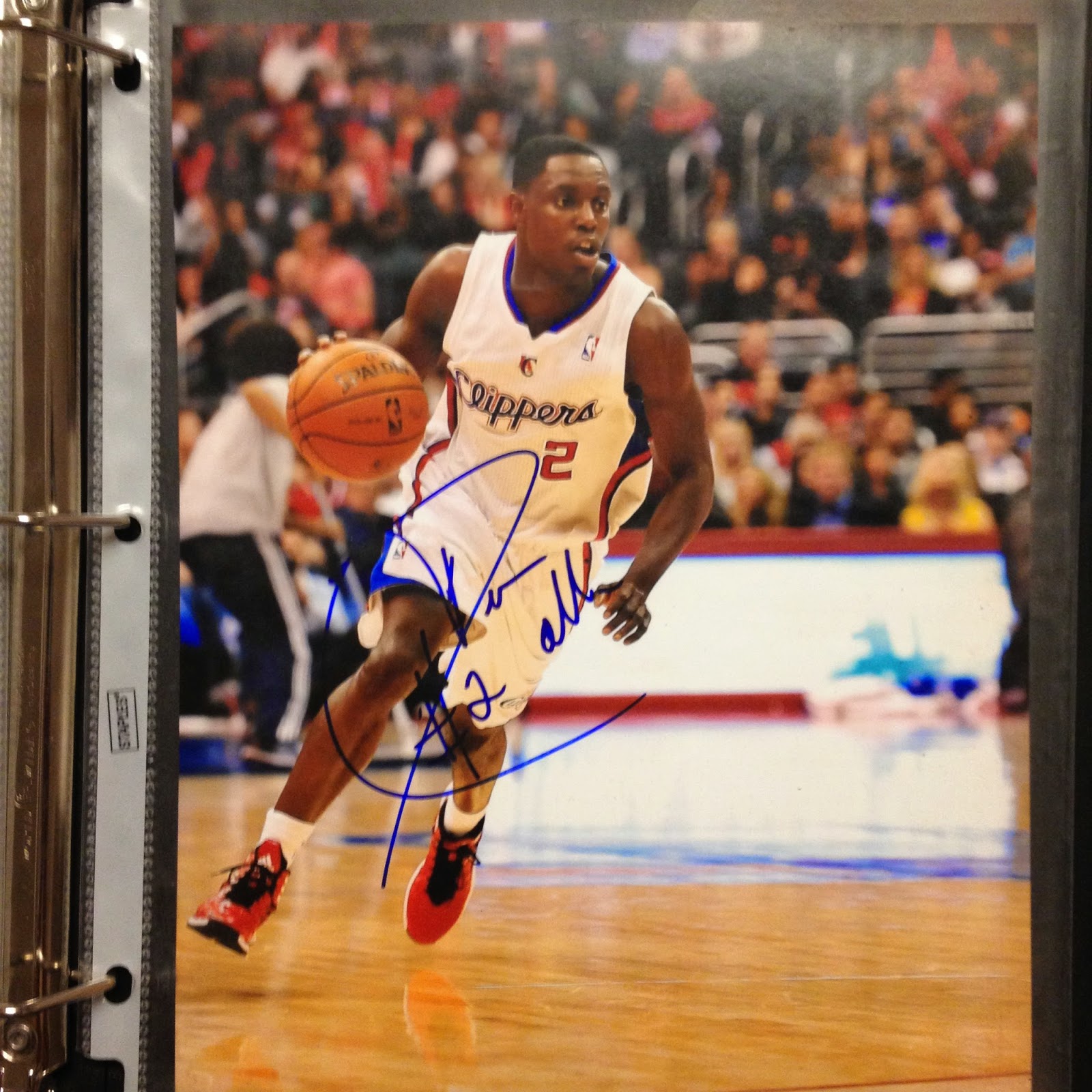 I ended up getting this Darren Collison 8x10 photograph autographed as the best autograph right at the buzzer to make the day worthwhile graphing wise. I'm sure Clippers fans will agree with me saying it'll be rough seeing him in Sacramento playing for the Kings now instead of in Los Angeles.

Now don't get me wrong. I had come to the event from a long weekend at work. I got my moneys worth from the catering and had a good time meeting players on my favorite football team and getting a few autographs. But the attitude Wagner had and the handler telling us Wilson would come only for him to skip out on it was really disappointing. I'm down to support good causes but I'm not sure if I'll be back next year.
Posted by RJ at 6:04 PM