I already posted about getting Albert Pujols' autograph on the last day of the regular season at Angel Stadium, well I neglected to post knocking out another long time goal longtime Angels manager Mike Scioscia. 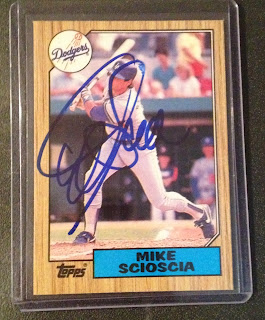 I haven't had much luck getting this Mike Scioscia autograph so getting after he got to the stadium was a nice pull for me. I've been after him for my 1987 Topps project for two seasons now. It's not like I have any sort of realistic belief that I'll finish the set but the guys in the set seem to be decent signers, its a pleasant design and it's something to work on every once in a while.
Posted by RJ at 12:03 PM